RYAN GARCIA has revealed that he was left feeling “betrayed” after boxing legend Canelo Alvarez gave an interview criticising him.

Mexican superstar Canelo has publicly criticised Garcia’s training habits, after acting as a mentor to the 23-year-old while the pair trained at the same gym.

Speaking to SI.Com Garcia said: “I didn’t quite understand why he would say something like that, especially to the media, because he could have definitely taken me somewhere else and told me personally.

“So I was kind of confused on that. I kind of took it as disloyal because I would never do that to him.

“I would never speak on him in the gym on what I think he should be doing, or whatnot.

“We’re a team, we shouldn’t even speak any ill towards each other. I know I’ve never done that and I never will.”

Garcia, who is currently unbeaten in 21 fights with 18 knock-outs, was “shocked” by Canelo’s behaviour.

Garcia added: “He’s a great fighter, a great human being and I hope the best for him.

“But when he said that I felt betrayed like, ‘Really?’ like, O.K. And to be honest, I don’t think he really … he didn’t really want to show me the love I did.

“I don’t think so. Just based on other things. But it’s all good, man. I have a good heart, good intentions and I never wish bad on him.” 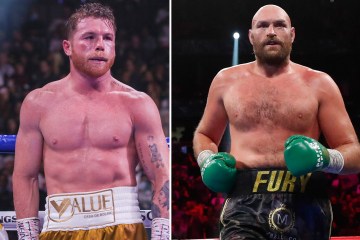 Since bursting onto the scene back in 2016, Garcia has gained massive attention from young fans

But no one is certain what prompted Canelo to blast his former protege, on more than one occasion.

Speaking to Complex Canelo said: “To me in my eyes, he’s wasting a lot of time and wasting his talent. I look at him and don’t see him 100 per cent dedicated and, to us, that’s a bad signal.”

Garcia left Canelo’s gym back in February in order to “build his own brand and make it bigger” ahead of his boxing return.

Speaking to BoxingScene Garcia’s dad and co-trainer Henry said: “Ryan decided that it was time for him to have his own gym, where he’s not confined to a certain schedule and a certain day.”

IT MUST BE GLOVE

Canelo is set to challenge Russian fighter Dmitry Bivol for the WBA light-heavyweight title on May 7 in Las Vegas.

Boxing promoter Eddie Hearn remains confident the fight will go ahead, despite Russia’s invasion of Ukraine.

As for Garcia he will fight Emmanuel Tagoe on April 9 in San Antonio, Texes.

Tagoe is a former IBO lightweight champion who, after losing his first fight back in 2004, won 32 fights in a row.