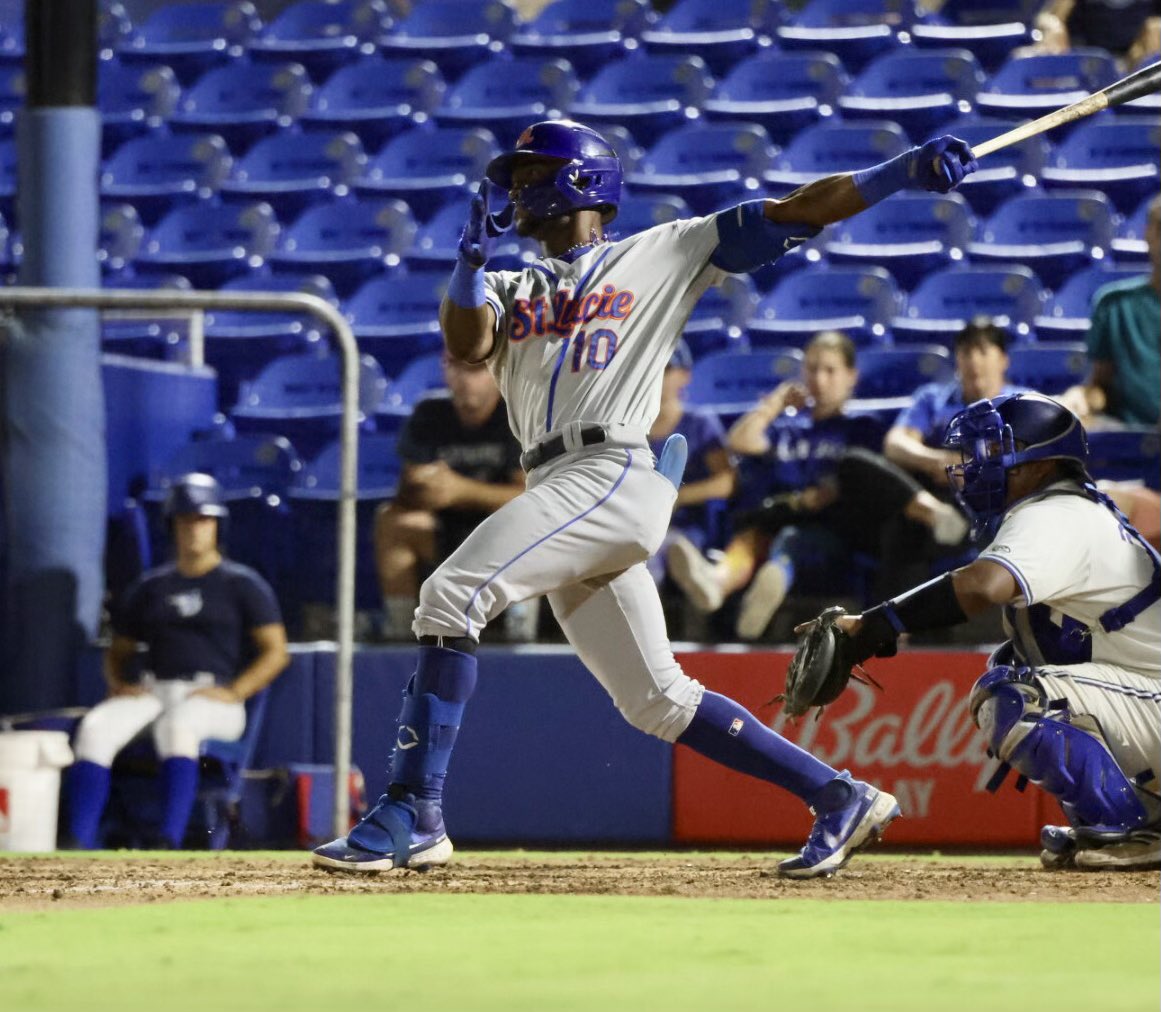 It’s playoff season in the minors, and several Mets affiliates are involved. Let’s get into it.

Syracuse split a six-game set with the Buffalo Bisons. The Triple-A Mets are now 59-82.

Jake Mangum led Syracuse with 11 hits, including two doubles and a home run in 21 at-bats. The switch-hitting outfielder is slashing .382/.426/.564 with two home runs and five stolen bases through 55 at-bats in September.

Did we mention Mangum can also mash?

He had three hits for the @SyracuseMets yesterday, including this go-ahead homer. pic.twitter.com/4AH1Q8CDgQ

Dominic Smith had a big series as well going 10-for-23 with two doubles and three home runs. Smith now has five home runs in his last 31 at-bats. His OPS is up to .842 through 195 at-bats in Triple-A.

Francisco Álvarez also had seven hits with a pair of home runs in 20 at-bats in his first full series since an ankle injury sidelined him in late August.

Francisco Álvarez got ALL of this one

Jose Butto delivered another solid performance on the mound, allowing just a run on three hits and three walks while striking out three in five innings. Butto lowered his ERA to 2.93 with a WHIP of 1.12 through six starts in Syracuse.

The Rumble Ponies dropped four of six to the Hartford Yard Goats to finish the second half of their season with a 25-42 record.

Carlos Cortes and Hayden Senger would each homer in the series as well.

On the pitching front, Tony Dibrell turned in his best start of the season, earning a win with six shutout innings. Dibrell allowed just one hit, walked four, and struck out six. The 26-year-old righthander went 2-2 with a 4.55 ERA in 29.2 innings with Binghamton this season.

Jose Chacin allowed two runs on three hits and four walks through four innings, though he did record seven strikeouts. Chacin struggled with Binghamton after he was dominant to start the year in Brooklyn, but he finished the season on a positive note allowing two or fewer runs while striking out seven in four of his last seven starts.

The Cyclones’ season came to an end as they fell to Aberdeen IronBirds in the South Atlantic League semi-finals.

Brooklyn took the opener of the series 8-1 with home runs from Jose Peroza, Joe Suozzi, and Matt Rudick. Luis Moreno earned the win, allowing a run on five hits while striking out seven in six innings.

However, the offense would struggle in Game 2 as the Cyclones scored just one run on a William Lugo home run. Dominic Hamel struggled, allowing five runs in four innings, in a 6-1 loss.

In the rubber game, Brooklyn overcame an early deficit with home runs from Peroza and Stanley Consuegra, but Aberdeen was able to hang on for a 5-4 series-clinching win.

St. Lucie swept a two-game series from the Palm Beach Cardinals to reach the FSL Championship for the first time since 2006.

The Mets took Game 1 6-1 on the back of 4 2/3 shutout innings from Blade Tidwell. Tidwell allowed just two hits while striking out six. Kevin Kendall drove in a run with a triple in the fifth inning before scoring on a D’Andre Smith single.

Calvin Ziegler started Game 2, allowing two runs (one earned) in just 1 1/3 innings. However, Joel Diaz came on to deliver his most impressive performance of the year, striking out 11 in six shutout innings to earn the series-deciding win. An RBI single from Kevin Parada would prove to be the difference in a 3-2 victory.

Players of the Week

Mangum would have likely been in the conversation for a late-season call-up had he not missed nearly three months with a back injury. Since returning from the IL, the 26-year-old outfielder has slashed .325/.367/.482 with six stolen bases and three home runs in 83 at-bats.

Mangum likely profiles best as a fourth outfielder in the major leagues. While his power is limited, Mangum has shown a knack for putting the ball in play while limiting strikeouts. His above-average speed and excellent outfield defense could earn Mangum a role with the Mets in 2023.

Joel Diaz was dominant to lock down St. Lucie’s spot in the FSL Championship, allowing just three hits and a walk while striking out eleven in six shutout innings.

It seems like we’ve been waiting all year for this type of performance from Diaz. After pitching to a 0.55 ERA in 49 1/3 innings in the DSL in 2021, the 18-year-old right-hander struggled to a 5.86 in his first full season stateside. However, he’s shown flashes of his potential thanks to a mid-90s fastball and a strong changeup and curveball. If Diaz can build on his impressive finish to the 2022 season, he could make for a very intriguing prospect in 2023.