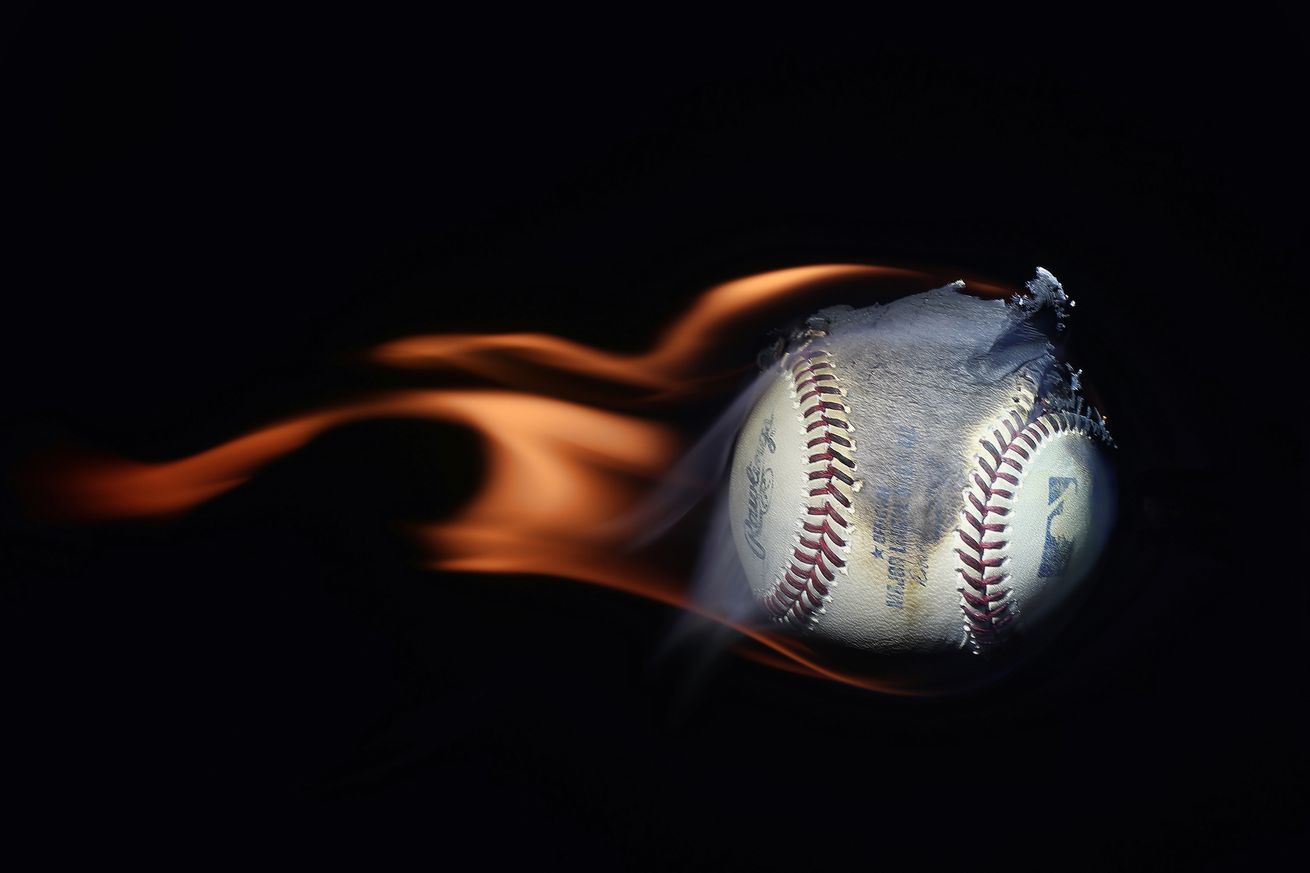 That time the Spokane Indians lit their baseball field on fire. On purpose.

It’s easy to take a look outside or a look at news headlines and feel like the entire world is on fire. For the west coast, the feeling isn’t too far off from reality. Aside from old wooden stadiums burning down, there aren’t too many times fire has delayed baseball games, particularly in recent years. While it’s not strictly related to fire, in 1977 the Tacoma Twins and Spokane Indians did have a game postponed due to the aftereffects of a fire.

At the beginning of September 1977, the Seattle Mariners were struggling through the homestretch of their inaugural season. Sadaharu Oh was breaking Hank Aaaron’s career home run record, and the Spokane Indians were facing a soaking wet baseball field, with but three games left to play in the Pacific Coast League season.

Spokane had an outside chance of winning the Western Division and qualifying for the PCL playoffs. It was an outside chance, sure, but it was a chance. They just needed to keep winning, and to keep winning they needed to play. Outfielder Dick Davis was pursuing the PCL batting championship and he needed at bats, and hits to go along with them. So, it was a disappointment all around when a game on September 2nd in Tacoma was rained out. The Tacoma Twins lost their final home date, Spokane lost a chance to pursue the playoffs, and Davis missed several at bats.

Both Tacoma and Spokane shifted to Spokane on September 3rd to play the final three games of the season. Spokane was ready to win. In the bottom of the fourth inning, the Milwaukee Brewers affiliate scored eight runs to take the lead. The offensive onslaught continued through the fifth inning. Through five Spokane had scored eleven runs on thirteen hits. Davis was in hot pursuit of the batting title, logging two hits in three at bats through five innings. Then, as the sixth inning began, it started to rain. Before Spokane had a chance to hit in the bottom of the sixth, the game was called due to the rain. Still, it was an official game and a win for Spokane.

The rain continued to fall, and as Spokane’s playing field was doused so were their playoff hopes. Later that night, Hawaii swept a doubleheader against San Jose to capture to PCL Western Division title. Spokane was out of playoff contention.

On September 4th, the day began with a baseball field that was a soggy, muddy mess. A doubleheader was scheduled to make up for the game that was missed in Tacoma. Minor league baseball ran on a shoestring as it was, and team management was eager to make up the missed game, and recoup some of the monetary losses that came with it. The field had to be dried, and it had to be dried fast. Tacoma catcher Sal Butera described what happened next:

The first thing they tried was to have an army helicopter hover twenty feet above the ground. When the helicopter didn’t dry the field, the grounds crew poured gasoline along the foul lines and home plate area. They set the gasoline on fire and eventually the fire burned itself out. Finally, the field was dry enough to start the game.1

It should be noted that the Spokane newspapers did not mention bringing in a helicopter to dry out the field. They did, however, mention the fire. The Spokesman-Review wrote about the strategy:

Gasoline is routinely burned by groundskeeping crews on dirt portions of baseball diamonds to dissipate moisture following a heavy rainfall like Saturday evening’s. 2

Pouring gasoline on a baseball field and lighting it on fire to dry it out seems like it should be a curiosity of a bygone era. Dear reader, it is not. Just last year at least two baseball diamonds—a little league field and a high school field—were soaked in gasoline and lit on fire. They were not isolated incidents either; it’s easy to fall down an internet hole exploring fields that have been lit on fire in the same manner for the same purpose.

The problem with pouring gasoline on your baseball field and lighting it on fire is that you’ve poured gasoline all over your baseball field. In the mid-1970s leaded gasoline was being phased out and replaced with unleaded gas. No mention was made in the newspaper accounts as to whether unleaded gasoline was used. Regardless, the health issues were not taken into account from any angle and before the start of the first game of the doubleheader the field was declared dry and ready to go.

Butera went out to take his place behind the plate. Initially, he didn’t notice anything anything amiss. Then, “The second batter came to the plate and while I couldn’t see that anything was wrong, I began to feel lightheaded,” he said.3 Having a loopy catcher behind the plate might make for some amusing baseball, but it was obviously a hazard. In the second inning, Spokane catcher Rob Ellis also felt lightheaded while crouching behind the plate. The extent of the problem became evident when home plate umpire Eric Gregg began to feel ill. Butera says Gregg collapsed nearly on top of him, having passed out. The Spokesman-Review wrote only that Gregg “found it impossible to continue.”4 After the second inning, the game went into a half hour delay.

The gasoline that had been poured onto the field earlier that day had been burned and dried the field. But the fumes had seeped into the dirt and were making the players around the plate sick. During the delay team officials tried to figure out how to make the fumes evaporate. They seemed at a loss for how to deal with the smell, using “several types of aerosol sprays”5 to try to cover up the smell. Spokane utility player Perry Danforth emerged from the clubhouse, “and returned to the field, tippy-toeing around the plate spraying deodorant.”6

Play briefly resumed after the delay, but the doubleheader was quickly postponed after Greg determined they could not continue to play with the gasoline fumes still wafting in the air around home plate. The Spokesman Review griped that the “aroma in the home plate area shortly after Gregg called the game was not that evident” and the 1,500 fans there to see them play two were upset at the postponement.7

The doubleheader was pushed to the next day, the closing day of the season. Since the playoff field had been determined, the teams would miss out on making up the lost game. However, it could have easily been worse.

The morning of the doubleheader, September 5th, Spokanite John Costello was driving past the ballpark when he noticed water spraying from the infield. Alarmed, he pulled over to investigate. He told the Spokane Chronicle, “I couldn’t imagine someone from here turning on the water last night and leaving it as wet as it was.”8 Costello searched for anyone who had arrived early to the ballpark. Finding that he was the only person present, he hopped the fence.

He found a hose running out on the field and turned off the water. The entire middle infield was flooded. There were several large puddles and a large hole of water and mud at shortstop. Spokane officials blamed the flooded field on vandals. Assistant Spokane General Manager Bill Culter Jr said ominously, “It appears someone doesn’t want us to play these last games.”9

That morning, the grounds crew dug up the gasoline-soaked dirt around home plate. They removed as much water from the infield as possible, and also removed the muddy dirt. New dirt was brought in and the games went on. Perry, clearly the practical joker of the Spokane team, brought the lineup cards to the umpires before the game wearing a gas mask. The mask was lent to him by a fan, just in case it came in handy.

The doubleheader went on without further incident. Tacoma and Spokane split the double tilt. The split gave Spokane the first Governor’s Trophy, having won the season series with Tacoma eleven games to ten. Davis went 4-for-8 in his bid for the batting title. He lost the batting title by half a point to Albuquerque’s Don Cardoza. For home plate umpire Gregg, the gas game was one of his last in the minor leagues. Following the PCL season, he was recalled by the National league, where he umpired until 1999.

As for burning the dirt to dry it out, I’m not sure exactly when the practice came to an end among professional grounds crews. These days, propane torches are used for the same purpose.

I think we can all agree, given current circumstances, the less fire and smoke on a baseball field, the better.