They rolled out the welcome mat at Canada’s Toughest 3rd Mile Oval as the OSCAAR Hot Rod and Modified tours, along with the Outlaw Midgets joined the action – Saturday, July 30th – at Peterborough Speedway. 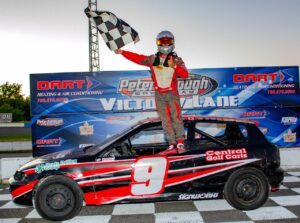 The night’s main event action got rolling with a 20-lap feature for the Battlefield Equipment Rental Bone Stocks that saw Sean Kennedy and John Bates on the front row. Kennedy took the lead on the drop of the green flag, with Jake Kelly moving into the runner-up spot. Brad Lavalle and youngster Tegan Stanley also showed their strength during the early stages. The race’s only caution flag – for an incident in the 3rd turn – slowed the pace but also gave the leader’s rivals the chance to plan a fresh attack. Stanley moved into 2nd just after the restart and tried stealing the lead from Kennedy over the closing laps. Lavalle also got close to the leader but couldn’t take the position. At the checkered flag it was Kennedy, Lavalle, Stanley, Steve Finnegan and Kelly as the top 5.

With 25 laps to settle the score, the Outlaw Midget Series made its return to Peterborough Speedway with Mike Bradley 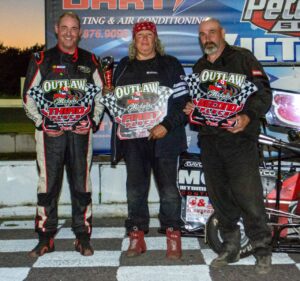 and Rob Harrison on the front row. Bradley took an early lead, with Larry Lawson on his tail. As the teams logged laps, all eyes were on the No. 2 machine of Jessica James. After experiencing mechanical issues during qualifying, the hard charger was marching through the pack and at the checkered flag, remained the only main event on the tour’ 2022 schedule. Lawson was 2nd, with Dave and Mike Bradley 3rd and 4th. The No. 98 of Kevin Spiez rounded-out the top 5.

Front row starters Donny Beatty and Ryan Cowan paced the OSCAAR Hot Rod starting field from the staging area to the green flag. Beatty took an early lead with a pair of the best known names in provincial short track asphalt racing – Bill Zardo Sr. and Tom Walters – looking for their turn at the head of the pack. Beatty logged some solid, consistent laps in the effort to keep his challengers behind him. Slower traffic came into play with about 7 laps on the board and Zardo worked his way by with a dozen laps complete, also opening the door for Walters. The pair waged a fierce battle once in control of the field, with the 80-year-old Bill Zardo Sr. taking the win. Walters, Steve Book and Beatty – who was nursing a flat rear tire – were the first across the stripe. Paul Senior chased the lead quartet to the checkered flag in the caution-free feature.

The 20-lap Jiffy Lube Mini Stock feature came to the line with Rob Crick and Victor Vowles on the front row. Crick and Brock Baker broke away from the field, with

Nolan Gould looking for an advantage on the outside line. Baker took over the top spot with 3 laps on the scoreboard but the pace was slowed for the first of a pair of yellow flags with 7 laps complete. The No. 28 took the lead on the restart, with defending track champion Jeremy Kelly moving into 3rd. Just as Gould was stretching his advantage, another yellow flag waved for an issue in the 2nd turn. Not even a late race caution flag would deny Gould his first win of the year. Baker, Kelly, Chris Tubman and Tyler Junkin rounded-out the top 5. 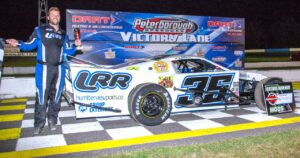 Luke Gignac and Herb Walters were on the front row as the 40-lap OSCAAR Modified finale wrapped-up the night’s action. Gignac led from the drop of the green flag, with Jason Keen and Walters hot on his tail. After working his way through traffic, current point leader Andy Kamrath was closing on the leaders and the driver of the No. 35 machine took the position on the restart following a lap 13 caution flag. Kamrath held-on for the win, while T.J. Edwards, A.J. Emms, Gignac and Dale Reinhart completed the top 5.

All finishing positions are unofficial and subject to scoring review and post-race safety and technical inspection.

Bullring bullet points: The night’s 50/50 draw resulted in a payday of just over $720.00 for Paul O’Shaughnessy of Oshawa, Ontario…Dwight Lavoie, the owner/operator of Kingsway Auto Centre – sponsor of the Junior Late Model class – took a turn behind the wheel of Dan Demers’ No. 67 Mini Stock…Nolan Gould was back in action in the Mini Stock ranks for the first time since the season’s opening night.

Coming-up Saturday, August 6th the first event of this year Hot August Nights racing series includes the Jiffy Lube Mini Stock, Trent Lakes Complete Plumbing Renegade Truck, KOD Disposal Super Stock and home track Late Model divisions, plus the Trailers Plus Canadian Legend Car Series and King of the Hill as the intermission feature. Pit gates open at 2:30, with the spectator grandstands unlocked at 5:00 and racing at 6:00. As always, grandstand passes can be purchased in advance through the ‘buy tickets’ option on the website. Cash only purchases can be made at the trackside walk-up ticket booth on raceday.