Hope you had a wonderful holiday season and that 2021 is off to a great start wherever you and your loved ones are Calling the Hogs! Excitement is building on campus as our winter and spring sports begin to gear up for what will be a very busy spring semester.

Before we dive head long into the new semester a few notes to wrap up from the fall.

Texas Bowl Audible
As 2020 drew to a close, it offered yet another curve ball related to Razorback Football. Coach Sam Pittman had his team ready to board a plane headed to Houston for the Mercari Texas Bowl when we received word that the game would be canceled due to COVID-19 and other issues within the TCU football program. We were scheduled to play the Horned Frogs on New Year’s Eve in a game televised by ESPN.

The cancellation of the Texas Bowl marked the first competition that our teams were scheduled to participate in that was not able to be contested or rescheduled. Prior to that cancellation, the Razorback Athletics program had combined to complete 72 of 72 competition opportunities.

While it was a disappointing way to conclude the 2020 football season, there was still plenty of progress to build on this spring in anticipation of the 2021 campaign.

Senior linebacker Grant Morgan earned second-team All-America honors from the American Football Coaches Association. Morgan became the first Razorback linebacker since Jermaine Petty in 2001 to be named an All-American. Morgan was also named as a Burlsworth Trophy (nation’s top walk-on) finalist and a semi-finalist for the Butkus Award (nation’s best linebacker). Morgan recently announced he is returning for another year with the Razorbacks.

Cap and Gown
Congratulations to the 27 Razorbacks who earned their degree in the recently completed fall semester. The graduates were celebrated by Razorback Athletics in a socially distanced ceremony at the Jerry and Gene Jones Family Student-Athlete Success Center. Those graduates who could not attend in person, families and others special guests participated virtually via Zoom. 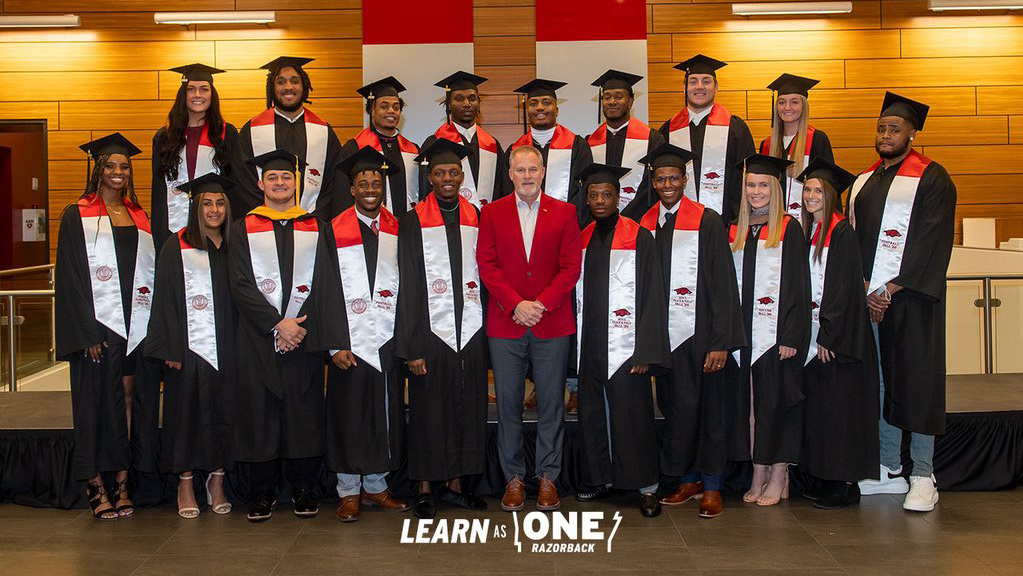 Coach Mike Neighbors’ squad had a tall task heading to No. 13 Kentucky for the SEC opener. The Wildcats used its home court advantage to capture a 75-62 win. Arkansas bounced back with a home win of its own this past Sunday, taking down Missouri 91-88. Arkansas is 10-2 overall (1-1 SEC) and ranked No. 13 nationally heading into Thursday night’s matchup with the Lady Vols (5:30 p.m. CT, SEC Network).

Vaulting into the New Season
Later this week, Arkansas will take the floor for the 2021 gymnastics season. Last season Coach Jordyn Wieber led the Razorbacks to an exciting campaign in her inaugural season. This year, the Hogs are getting noticed nationally, including a No.15 ranking in the Women’s Collegiate Gymnastics Association (WCGA) pre-season poll.

Arkansas opens its 2021 season at LSU on January 8 before hosting the Tigers at Barnhill Arena on January 15. The Razorbacks will host four meets at home this season. For information on season tickets click here.

Back on Track
The Randal Tyson Track Center on the campus of the University of Arkansas will once again be home to the nation’s best in indoor track and field in the coming months.

National Exposure
NBC recently visited the University of Arkansas campus to highlight the COVID-19 protocols in place with the Razorback men’s and women’s basketball teams. A feature story was broadcast on December 19 on the NBC Nightly News with an expanded story posted on the NBC Nightly News website. The stories outline the outstanding medical professionals, coaches and student-athletes who are working to keep everyone safe during this pandemic.

To view the story that aired on NBC Nightly News click here.

Razorback Tributes……..
Our thoughts and prayers go out to the families, friends and teammates of these former Razorbacks who we lost last month.

Kevin Wyatt, a defensive standout for Coach Lou Holtz and Coach Ken Hatfield, passed away in Denver, Colorado on December 28. Wyatt played for the Razorbacks from 1982-85. Kevin Wyatt Obituary

Razorbacks Coming Soon
With nearly all of our sports gearing up again for spring semester competition, make sure you mark your calendars. Whether you are cheering our student-athletes on in person, listening on radio or watching the broadcast, our Razorback Athletics All-Sports Calendar will keep you updated with the latest information.

We look forward to seeing you On the Hill again soon!