NEW ORLEANS – Razorback Ayden Owens, the 2022 NCAA Indoor champion in the heptathlon, was named the 2022 National Field Athlete of the Year. Voting for the honor was conducted by coaches in the United States Track & Field and Cross Country Coaches Association.

This marks the eighth time a heptathlete has claimed the indoor honor since 2006. Owens adds his name to an impressive list of combined event honorees.

Scoring 6,272 points to win the heptathlon at the Razorback Invitational this season, Owens moved ahead of all but one of those names on the all-time collegiate list. Owens ranks as the No. 2 performer with the No. 2 performance, trailing only the collegiate record of 6,499 set by Eaton in 2010.

Owens also bettered the Arkansas school record of 6,175 set in 2013 by Kevin Lazas, who claimed the NCAA heptathlon title that season. Lazas score now ranks No. 9 on the all-time collegiate list. 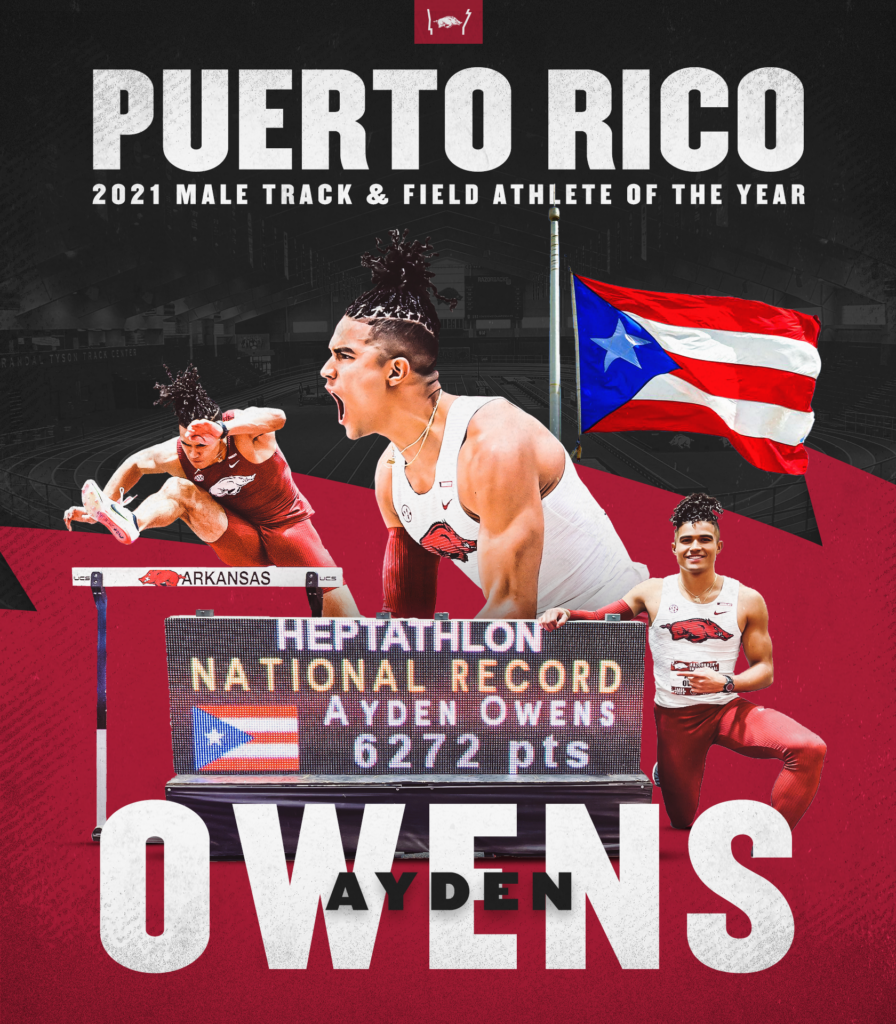 The score by Owens also improved his Puerto Rican national record from his previous best score of 5,995 set in 2021 as the bronze medalist at the NCAA Indoor meet. This past weekend, Owens was honored in Puerto Rico as the 2021 Male Track & Field Athlete of the Year.

Having been added to the Bowerman watch list following his 6,272 collegiate-leading performance Owens produced a Bowerman moment during NCAA Indoor Championships in the manner he claimed the heptathlon title.

An epic finish to the NCAA Indoor heptathlon had Owens moving from fourth to first place in the final event, with a superlative 2:31.55 in 1,000m, as he made up a 152-point deficit for the gold medal position and won the title by 11 points.

Producing a score of 6,211 points for the victory was the third-best winning score in NCAA history and the fifth best performance on the collegiate all-time list.

Following the World Athletics Indoor Championships held this past weekend in Serbia, Owens’ score of 6,272 ranks fifth on the 2022 world list.