This weekend marks the return to racing for the Razorbacks as they compete in the SEC Preview hosted by LSU at the University Club of Baton Rouge on Saturday, September 19, with a start time of 9 a.m. for the men’s race on a 6,000m course.

A squad of 12 Razorbacks are scheduled to compete among a field that includes LSU, Mississippi and Texas A&M. Spectators are allowed to attend with a requirement of wearing masks.

“It will be fun to get the team together again for a meet, something we haven’t done the since indoor nationals,” said Arkansas men’s head coach Chris Bucknam. “That in itself is a victory for us. We’re not going in with any high expectations, except for the fact that we want to test our fitness and see where we’re at.

“We’re a longways from being totally race fit, but we kind of want to get a benchmark down and see how we perform over this 6k race. It will be fun to see these guys get out there and compete again.”

Leading the Razorback crew racing this weekend are a pair of SEC champions in Gilbert Boit and Emmanuel Cheboson. Boit captured the 2018 SEC cross country title, then had a redshirt 2019 cross country season. Cheboson claimed the 5,000m title at the 2020 SEC Indoor meet, the last competition for the Razorbacks. 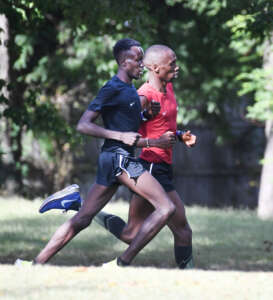 “It’s been nice getting back to our facilities and we want to thank the University for allowing us to get back together as Razorback teammates and train together,” said Boit. “We are looking forward to the season and bringing our trophy back in cross country. I’m also looking forward to winning another individual title this year after winning in 2018.

“We were separated for so long when the outdoor season was canceled. It’s been so nice being back and training together, helping each other as a team. Just being teammates again, in training and out of training.”

Newcomers who will make their debut in a Razorback uniform include Sam Hall, Andrew Kibet, Jacob McLeod, Luke Meade and Tommy Romanow.

“Competing against other teams from the SEC is always a challenge for us,” noted Bucknam. “Ole Miss is the returning conference champions the past two years. You have to give them the nod because they’ve earned it.

“It’ll be good to get in there and run and see where we’re at with some good competition. We will have our hands full, but we’re going to compete to win. We only get a few chances, so we want to take advantage of any competition we get.”

The SEC Championships will also take place at the University Club at the end of October, so racing on the LSU course this weekend provides an opportunity to get a feel for the course prior to the conference meet.

“We had a few choices of where to go, but I like to get on the championship courses when we can,” explained Bucknam. “With us not having a NCAA Championship this fall, the next championship race for us is the SEC meet.

“So, we will get down to LSU and see what their course is like and get a taste of it a little bit. Then when we get back there on Oct. 30 for the SEC Championship, we will be used to it.”

Comments on the upcoming season from Coach Bucknam & Coach Harter