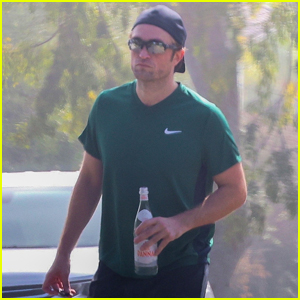 Robert Pattinson is cooling down after another tennis lesson.

The 35-year-old Twilight actor sipped on a glass bottle of water as he made his way out to his pick up truck as he left a private tennis lesson on Friday morning (December 3) in Los Angeles.

PHOTOS: Check out the latest pics of Robert Pattinson

For his lesson, Rob went sporty in a green T-shirt, black shorts, a backwards baseball hat, and sunglasses.

Rob has been spending a lot of time lately working on his tennis skills. Back in August, he was photographed leaving the facility alongside this Oscar-winning friend.

If you missed it, Rob bumped into Cardi B at a recent party and the two had a hilarious interaction! Find out what happened.

Make sure you check out the trailer for Robert Pattinson‘s highly-anticipated movie The Batman, which will be out in theaters on March 4, 2022!