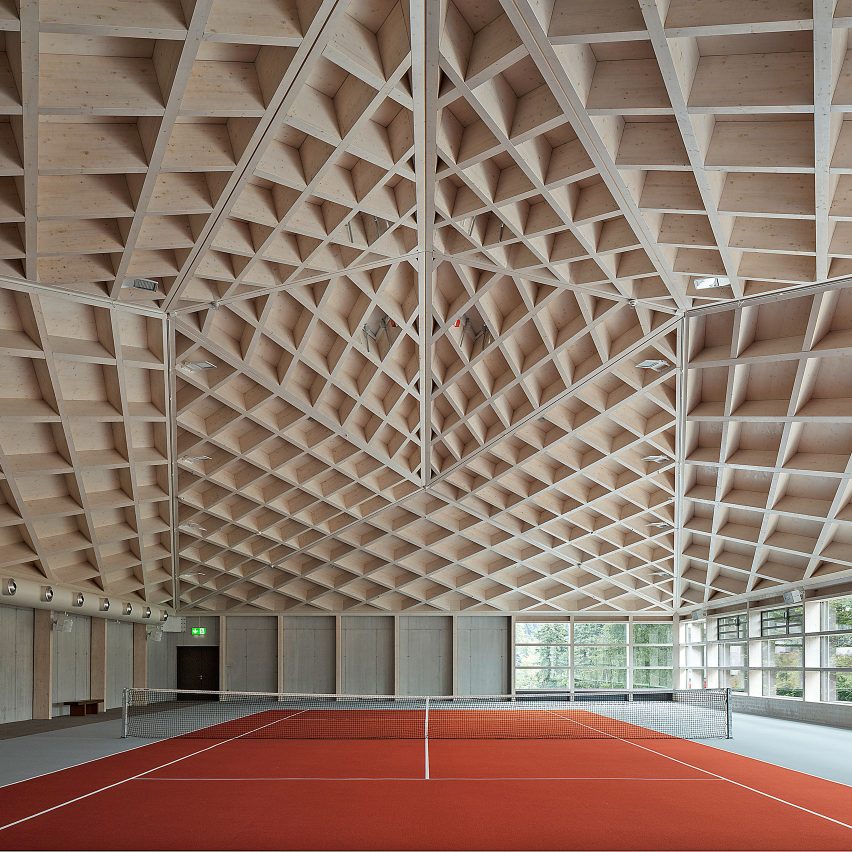 Called Diamond Domes, the tennis courts stand 874 metres above sea level and are part of the Bürgenstock Resort in the Swiss Alps.

Perched atop concrete foundations in the mountains, the two indoor tennis courts with undulating roofs face each other across a central outdoor court. In winter, the outdoor tennis court is turned into an ice rink for winter sports such as skating and curling.

"The form and the indoor profiles were given to us by the architects. We then developed and designed the whole construction, the connections and all the details," Neue Holzbau director Bruno Abplanal told Dezeen.

Rüssli Architekten said the diamond-pattern created by the faceted roof is meant to be reminiscent of crystal formations in rocks.

Diamond Domes' roof plates are made from spruce cross-laminated timber (CLT), made by layering and glueing slices of wood together to create a strong and light building material.

The tennis court roofs in Bürgenstock are a demonstration of an engineering system created by Neue Holzbau called GSA Technology. Steel rods are glued into the CLT so that each module can be quickly bolted and held in place, able to bear heavy loads.

The tennis halls have concrete walls on three sides, with a fourth wall of glazing facing out over the valley below. This wall of windows had to be taken into account when the roofs were constructed.

"The structure was assembled on four pre-positioned assembly towers. The support structure was erected on top of these towers in a slightly 'exaggerated' position," explained Rüssli Architekten.

"At the assembly stage, the support structure was in a sort of pre-tensioned state. Once the three-layer panels had been assembled and complete static attachment to the diamond system had been achieved, the assembly towers were lowered," added the studio.

"Once the initial, planned deformation of the roof support structure had taken place, this was fixed to the concrete walls on three sides, meaning that deformations caused by variable roof loads could then only affect the window-side facade area."

Aluminium composite panels cover the roofs' exteriors, chosen for their durability and colour, which complements the stone used for the buildings' facades. The panels are arranged in a diamond pattern, mirroring the wooden roof below.

Vent flaps in the facade and roofs are used to ventilate the courts in summer, and the two spaces double as events halls.

Rüssli Architekten also built a new clubhouse for the tennis facility that faces the outdoor court and connects the two indoor courts.

Neutelings Riedijk Architects and Bureau Bouwtechniek recently completed the largest CLT project in Europe – the conversion of a 20th-century railway shed in Brussels.

Photography is by Leonardo Finotti unless stated otherwise.