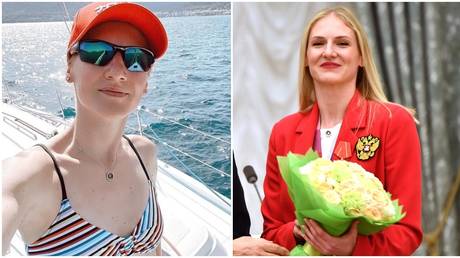 Russian seven-time Olympic champion Svetlana Romashina had a withering response to one Instagram body-shamer who attempted to taunt the synchronized swimming icon over her chest size.

Romashina, 32, secured her status as the most decorated athlete her sport has ever seen by scooping double gold in the pool in Tokyo during the summer.

The Moscow native clinched the duet title along with partner Svetlana Kolesnichenko before helping the Russian Olympic Committee (ROC) team to gold with another flawless showing in the group event.

After being feted for her achievements at the Kremlin – where she was awarded the prestigious Order of Alexander Nevsky – Romashina has since been enjoying a well-earned rest.

Sharing an image from a boat with her 60,000 Instagram followers, Romashina wrote: “I haven’t disappeared, we’re now at a regatta.

“We’re in a fight and a race! I’m sending you a good mood, warm sea and bright sun.”

Coming around the occasion of the star’s 32nd birthday on September 21, plenty of responses including messages of best wishes to the swimming queen.

Remarkably though, some people took the image of Romashina in a bikini top as an invitation to troll her.

“Chest – size 0! But rich! The man got lucky with his woman!” wrote one person going by the name of @bern1907, supposedly referring to Romashina's husband.

Unperturbed, Romashina shot back with a message of her own, writing “Is that happiness?” and adding a winking emoji in a burn to the failed body-shaming attempt.

“When a woman is poor, no one needs her, and when a woman is rich, then immediately around her there’s a sea of ​​gigolos stuck to her money!" ranted the Instagram user in response.

“And they don't care what her breast size is and everything else. So your husband is stuck! Perhaps I shouldn’t have written my comment! Sorry.”

“This isn’t a comment, this is a brain indicator – size zero!” wrote another person in a withering putdown of the troll.

After racking up an incredible haul of seven Olympic golds and 21 world titles, mother-of-one Romashina suggest that the Tokyo Games would be her last.

“I need to understand what to do now. These are officially my last Games. But I won’t enter into more details about next year,” said the star.

“I need to have a rest, I am very tired, but in a few months, I’ll announce my plan to everyone.”

In the meantime, Romashina is basking in the glow of another golden Olympic summer – and doesn’t seem to be letting the trolls get her down.