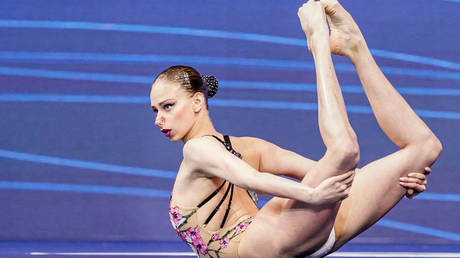 Russian artistic swimming star Varvara Subbotina has celebrated her 21st birthday as a double champion after striking gold twice at a World Cup competition event, adding to her country's medal tally after organizers FINA opted against handing out suspensions as a result of the attack on Ukraine.

While high-profile sporting organizations including FIFA and UEFA have barred Russian and Belarusian stars from competing, the international swimming federation has not followed suit despite being working with the International Olympic Committee, which has encouraged federations to take action against individuals and teams from the two nations.

Performing three days before her birthday, Subbotina won the women’s Solo Technical and combined with veteran Svetlana Kolesnichenko to triumph in the Duet Technical.

Although the competition was hosted in the US and Canada, the judging took place virtually and was based on pre-recorded performances filmed by the swimmers. The Russian stars appeared on camera as neutral athletes.

"Happy birthday to me," the Moscow-born two-time world champion told her Instagram following of more than 53,000.

"21 years old, which I was really looking forward to… not because everything is possible, but simply because the number is beautiful."

Subbotina shared footage of herself going for a meal at a Moscow restaurant with friends as part of her celebrations.

"Today is the birthday of one of my idols in recent years," said one fan alongside a clip of Subbotina showcasing a typically supple routine by the pool. "Happy birthday, Varvara Subbotina."

Subbotina's sporting plans for the rest of the year appear to be under threat from several national federations that have announced plans to boycott competitions if Russian and Belarusian athletes are allowed to take part.

Swiss Aquatics and Poland's national swimming body said on Sunday that they will not appear at the World Championships in Budapest in June alongside rivals from the countries.

The Norwegian Swimming Federation also said on Monday that it had plans to form an alliance of Nordic nations who will threaten a boycott.