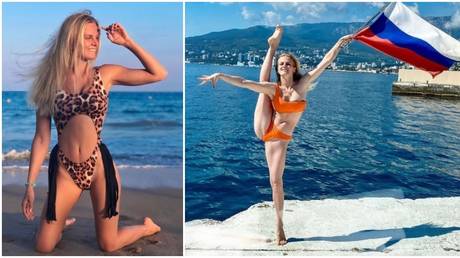 Olympic synchronized swimming queen Marina Goliadkina had a message for her ‘haters’ as she posed with a Russian flag in a photo apparently taken in Crimea, having received anger for a recent image alongside Vladimir Putin.

Goliadkina, 24, was born in Donetsk and represented Ukraine until 2015 before she switched allegiances upon receiving Russian citizenship.

Having won a bronze medal with the country of her birth at the European Championships in 2013, Goliadkina has enjoyed nothing but gold since making the move to Russia – including five world titles and an Olympic crown as part of the all-conquering ROC team in Tokyo this summer.

Along with her teammates and fellow Russian Olympic medalists, Goliadkina was invited to the Kremlin at the weekend for a ceremony which featured a congratulatory speech from Russian President Putin.

Goliadkina herself had also had some words of praise, speaking of her joy at achieving her childhood dream by winning gold.

“I was born into a sports family in the city of Donetsk, and in 2014 I faced a difficult choice: to leave my dream or to continue to the end and do my best,” Goliadkina had said, going on to thank those who helped her on her journey.

“Today I am happy that I can stand here, next to you, Vladimir Vladimirovich [Putin], and say out loud that I have defended the honor of a great country! This means great happiness for me.

“Taking this opportunity, I want to thank you for supporting sport, for believing in us, and for the fact that we were able to train at the best modern sports facilities that allowed us to win.”

A follow-up Instagram picture of a smiling Goliadkina alongside Putin didn’t appear to go down too well in some quarters however, as the swimming star turned off the ‘comments’ option for the post.

But not giving in to the haters, Goliadkina made her allegiances loud and clear with a new post on Tuesday as she enjoyed a well-earned sunshine break after her Olympic exertions.

Performing an acrobatic move in a bikini and holding a Russian flag in one hand, Goliadkina wrote: “Guess where I’m on vacation? Hello to the haters.”

After one fan asked “Yalta”, Goliadkina hinted that was right, adding a subtle “Maybe”.

Goliadkina’s teammate and fellow gold medalist Alla Shishkina asked: “Haters?” – to which Goliadkina replied “for the last photo”, referring to her image with Putin.

“Have a nice vacation! And judging by the fact that you removed the comments under the previous photo, the comments were different... and unfriendly....,” replied one fan.

“Don't pay attention to the spiteful critics. Let them breathe their poison.”

“Thank you very much, my beloved followers,” Goliadkina wrote in another reply.

Yalta is a resort city on the Crimean peninsula, which rejoined Russia following a landslide referendum in 2014 after civil chaos broke out in Kiev.

A popular spot for tourists, it looks like the perfect place for Goliadkina to relax after her golden summer.