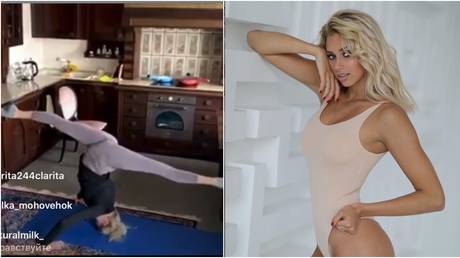 You might think being cooped up at home without access to a pool is a problem for synchronized swimmers during the coronavirus lockdown, but not so for Russian world champion Varvara Subbotina.

Subbotina, 19, won double gold as part of the Russian team at the World Championships in China last year, adding to a pair of first-place finishes at the European Championships in Glasgow one year previously.

But as with athletes the world over her hopes of boosting that tally at the Olympics were put on hold when the Tokyo Games were pushed back to 2021 due to the Covid-19 pandemic.

Despite being largely confined to lockdown at home in Moscow, Subbotina hasn't let the lack of pool practice put a complete dampener on her training - as she showed in an Instagram Live session broadcast to her almost 40,000 followers.

In the clip Subbotina shows off her incredible range of lower-body mobility, as standing on her head she slowly rotates her legs 180 degrees around her body while also twisting her feet.

She finishes by moving her legs bolt upright, in a mini-routine which looks every bit as impressive outside the pool as it does in it.

Subbotina is not the only Russian swimming star to get creative during coronavirus quarantine.

Teammate and five-time Olympic champion Svetlana Romashina recently showcased an innovative routine for her fans when she performed with her daughter in the bathtub.

Fellow Olympic champion Vlada Chigireva also hasn't let being housebound prevent her from going through her routines - in her case from the comfort of her lounge.

Away from Russia's synchronized swimming stars, breaststroke world champion Yulia Efimova wowed fans worldwide with her tips on how to 'swim' without leaving dry land.

Efimova made creative use of a kitchen tabletop, dangling herself over it before performing her strokes and showing off her remarkable upper- and lower-body strength.

???? How does an Olympian swimmer work out at home... with no swimming pool?

While Russia's swimming queens look like they're just about making do with makeshift waterless workouts, one suspects they'll be desperate to get back in the pool for the real thing as soon as possible.