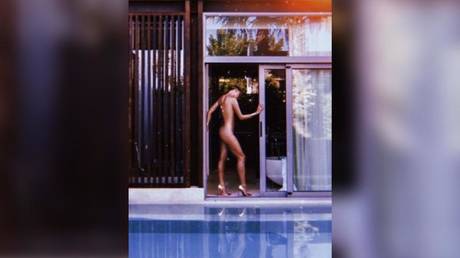 Olympic champion synchronized swimmer Anzhelika Timanina has congratulated Russian men on ‘Defender of the Fatherland Day’ in an unusual way, sharing a raunchy picture of herself on social media.

“Protect us, pretty & weak girls,” Timanina wrote on her Instagram page while posting a half-naked photo which gained more than 5,500 “Likes” within several hours.

On February 23, Russia celebrates ‘Defender of the Fatherland Day’ – more commonly known as ‘Men’s Day’ – which traditionally focused on military achievements and honoring those who serve (or have served) in the Russian army, but extends to men of all vocations being congratulated.

Timanina is the former captain of Russia’s synchronized swimming team, who along with a 2012 Olympic gold medal also possesses 11 world and two European titles, before retiring from swimming in 2016 to find a new passion in surfing.

The 30-year-old blonde, who specializes in surfing shortboard competitions, was invited to the national surfing squad with plans to represent Russia at the upcoming 2020 Tokyo Games.

The surfing competitions in Tokyo are scheduled to run from July 26 to August 2. Timanina will be hoping she’s there to ride the new wave of popularity for the sport.