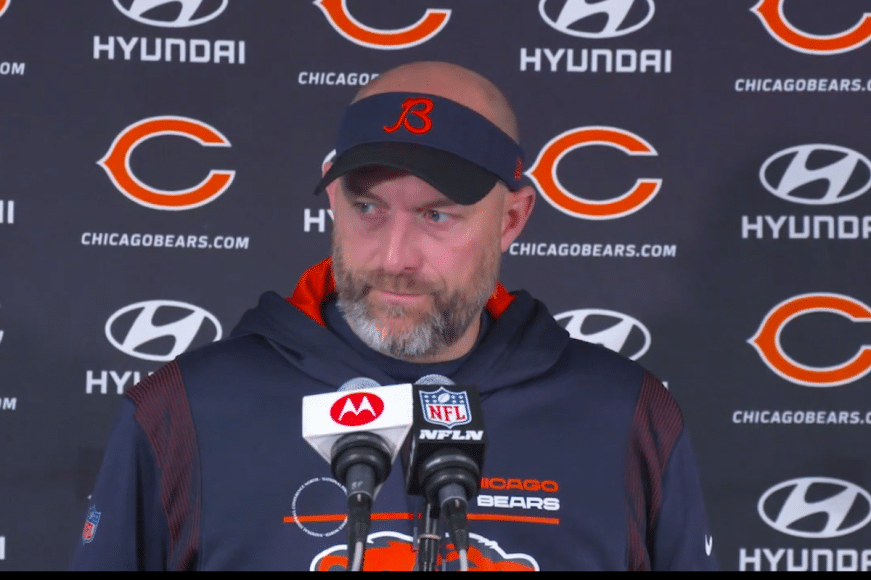 With the Chicago Bears floundering at 4-8, it is a safe bet their 2021 season is over. The fact they still have five games to play will only make the misery last longer. Having to endure it knowing Matt Nagy is still the head coach makes it worse. Sunday’s loss to Arizona was hardly shocking. Once again the offense couldn’t get out of its own way. Four interceptions by Andy Dalton. Receivers couldn’t get open. Lack of discipline.

The same old list. One would think Nagy can’t possibly find another way to anger fans at this point. As always, the man is full of surprises. With the team heading nowhere this year, the logical plan moving forward for them should be roster evaluation. Getting a look at their younger players to see if any of them will be part of the long-term picture. Justin Fields is an obvious one, but another is Teven Jenkins. The 2nd round offensive tackle finally returned from Injured Reserve this week.

Getting him snaps seems like the logical course of action, right?

Nagy doesn’t seem so sure. When asked whether the plan moving forward will remain Jenkins sitting on the bench, the head coach offered confirmation. Barring something unexpected happening to Jason Peters, the rookie will be the backup and watch from the sidelines. For people anxious to see what Jenkins has? That is not likely to go over well.

The worst part about it is the lack of common sense. What purpose does playing a 39-year old tackle who will likely retire after this season serve? The Bears aren’t going to the playoffs. Peters doesn’t need any further mileage on his body. Right now the person that can benefit most from those reps is Jenkins and yet Nagy doesn’t seem anxious to give him a chance.

Matt Nagy is operating like somebody who knows he is gone

Evaluating the young guys might make sense in a vacuum, but for a head coach who is 99% gone after the season? It doesn’t serve much of a purpose. The only way Nagy saves himself is by winning football games and that isn’t going to happen by playing rookies. At least in his mind. This is despite rookies like Khalil Herbert, Larry Borom, and Fields making solid contributions this season.

Meanwhile, guys like Dazz Newsome and Thomas Graham Jr. can’t get looks despite serious issues at both wide receiver and cornerback. The Bears made it clear they view Jenkins as a big part of their future. That is why they traded up to get him. Now he is healthy and the season isn’t going anywhere. This is a perfect opportunity to get the kid some work.

Add this to the list of reasons why the Bears should’ve fired Nagy.

They had two opportunities both during the bye week and the extended layoff between Thanksgiving and the Cardinals game. Each time they elected to keep the man in charge. Now it threatens to hamper their efforts to evaluate the roster. This is what bad football organizations do.

Chelsea vs Tottenham – super odds boost: Get £5 max bet on Blues at 8/1, or Spurs at 33/1 with 888 Sport special offer
09:10TheSun.co.uk (sport)
Bettors are expecting the Titans to advance past the Bengals in a high-scoring AFC bout
Yesterday 19:21For The Win (usatoday.com)
Robbie Gould lifted the 49ers over the Packers, and now anything is possible
05:25For The Win (usatoday.com)