And the Mexican, who faces Billy Joe Saunders on May 8 with three super-middleweight belts on the line, thinks he would KO Mayweather if they fought ‘at their prime’.

It was announced earlier in the week that Mayweather would take on YouTuber Paul in an exhibition fight on June 6.

The American’s undefeated boxing record is NOT on the line.

But one boxer who might give the fight a miss is Canelo, who lost to Mayweather in 2013 in a majority decision.

Speaking on In Depth With Graham on YouTube, the 30-year-old said: “It’s not really relevant at all. It’s an exhibition, just for making money. It’s stupid.

“Why do they give licences to people who’ve never in their life thrown a punch?

“If there’s a death, the commission will be responsible. Why? Because they issued the licence for the fight.”

Although it went to a majority decision, many thought Canelo was outclassed by Mayweather in 2013 and that it should have been a much clearer result on the scorecards.

Canelo regrouped after the loss and went on to win titles across multiple weight divisions, while Mayweather retired 50-0 undefeated, his last being the 10th-round KO of Conor McGregor. 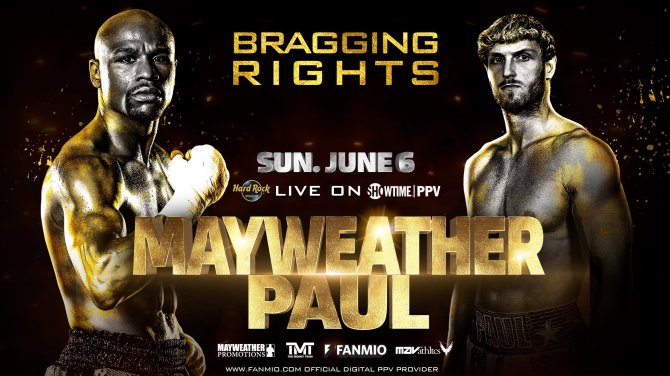 CANELO VS SAUNDERS: TV, live stream and start time info ahead of the big fight

Jake Paul WILL get KO'd and '15 mins are almost up', warns Dana White

On a hypothetical rematch against his old adversary, Canelo added: “He’d have nothing to do with me.

“If we were both at our prime, our best prime, he wouldn’t have anything to do with me. Nothing. I’d knock him out.”

Mayweather said in an Instagram post: “Logan Paul and I are going to fight at Hard Rock Stadium. Mayweather Promotions, Fanmio and Showtime will team up to give you an epic event.”

The fight was originally scheduled for February 20 but it was postponed due to Covid-19-related restrictions that wouldn’t allow a full stadium, according to Fox News.

The five-time world champion must weigh in under 160 pounds and Paul under 190 pounds, according to the fighting terms.

No details were mentioned about how many rounds there will be.