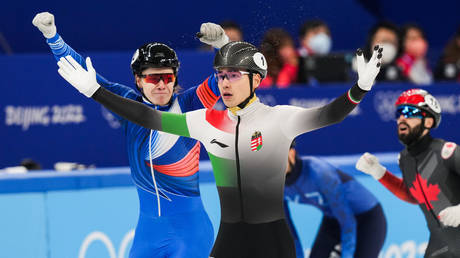 Rounding off the medalists, Steven Dubois of Canada snatched bronze with 40.669 but was given stiff competition by Kazhakstan's Abzal Azhgaliyev, who put in a 40.869 performance.

Ivliev got to the final by winning his semifinal ahead of Italy's Pietro Sighel and his ROC compatriot Pavel Sitnikov, who finished third in the semi-final and second in the Final B to China's Wu Dajing.

As the son of former two-time 3000m Relay European champion Elizaveta Ivljeva, 21-year-old Moscow native Ivliev came to the Chinese capital as a continental champion himself after achieving gold in the men's 500m at the European Championships in Gdansk last year.

Saying before Beijing 2022 that he loves short track "for the speed and the unpredictability," Ivliev also stated that his ambition was to win a medal, "keep getting better" and "make my family even prouder of me".

Ivliev has now achieved this, and can claim further spoils for the ROC when competing in the men's 5,000m relay final on Wednesday.

Thanks to Ivliev's individual accomplishment, the Russian team now boasts 16 overall medals in Beijing, made up of four golds, five silvers and seven bronzes.