Munster Rugby and the IRFU are pleased to confirm the latest player contract extensions and promotions to the senior squad for several Academy players.

The Munster trio of Mike Haley, Gavin Coombes and Neil Cronin have all signed two-year contract extensions that will see them remain with the province until at least June 2023.

There is further good news with Greencore Academy players Jake Flannery, James French, Seán French and Ben Healy all advancing to the senior squad ahead of the 2021/2022 season on one-year deals while John Hodnett has put pen to paper on a two-year deal.

Full-back Haley signs his first contract extension after joining the province in 2018.  Not only has the 26-year-old made 53 appearances in red and scored nine tries, but his impressive form also ensured he wore the starting 15 jersey on all of his appearances for the province.

After making his provincial debut against Cheetahs in September 2018, Haley went on to play more minutes than any of his colleagues in that initial season.  The Preston native was further rewarded for his efforts when called to make his Ireland debut against Italy in August 2019.

Young back-row forward Gavin Coombes is enjoying a breakthrough season after making the step up to the senior squad in 2019. The 23-year-old made a try-scoring Champions Cup debut against Harlequins in December and is the province’s leading try-scorer this season with eight tries in 14 appearances.

At the beginning of February, he joined the Ireland training camp ahead of the first round of the Guinness Six Nations.

Currently rehabbing an ACL injury, Cronin has made 24 appearances for the province.  The 28-year-old impressed when coming on against Scarlets in the season opener but was unlucky to sustain a long-term injury while training in October.

The scrum-half’s latest contract extension is credit to his performances to-date and allows him the time to recover fully and make his mark further when he returns to the red jersey. 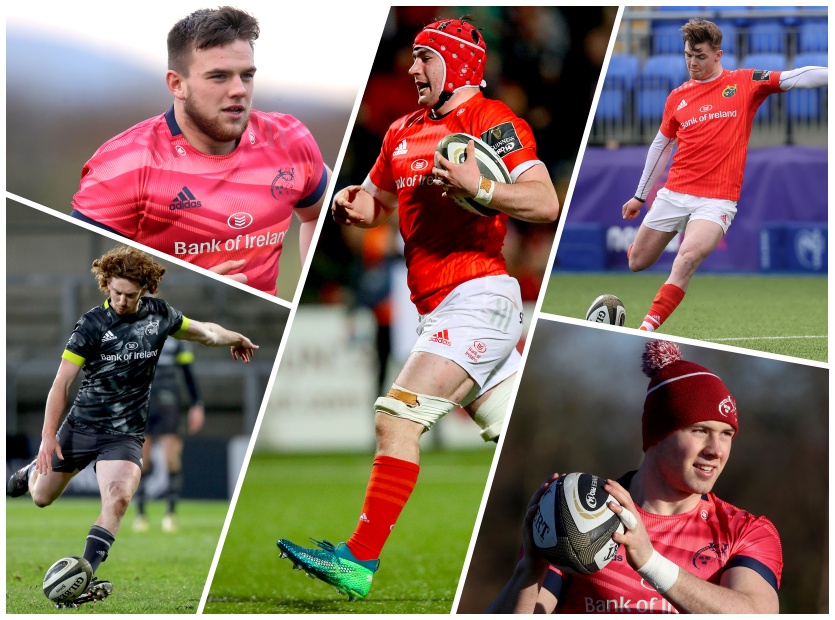 Looking at the Academy in-take, versatile Jake Flannery, who can operate at both out-half and full-back, is currently in his second year of the Greencore Munster Rugby Academy. The Tipperary native made his senior Munster debut during the 2019/20 season and he followed that up with his second appearance this season in the 28-16 victory over the Dragons in Wales.

Flannery came through the Munster pathway at first with Kilfeacle & District RFC before playing schools rugby with Rockwell College. The 21-year-old was a standout performer in the Ireland U20s Grand Slam triumph in 2019.

James French is currently in his third year of the Greencore Munster Rugby Academy. The Bandon loosehead prop is currently side-lined after sustaining a hamstring injury against Ulster A in December.

French has represented Munster at U18s, U19s and U20s level. On the international stage, he has worn the green jersey at U19s and U20s level which included five appearances during the 2018 U20s Six Nations. French plays his AIL rugby with UCC.

Seán French, who can operate on the wing or at centre, is also in his final year of the Greencore Munster Rugby Academy. The 21-year-old scored a try on his Munster debut this season in the 52-3 victory over Zebre in November.

French plays his club rugby with Cork Constitution where he helped the club win their 30th Bank of Ireland Munster Senior Challenge Cup in December 2019. The UCC student was also a Munster Schools Senior Cup winner in 2017 with PBC.

Ben Healy has enjoyed an excellent start to the season as he helped Munster to victories over Scarlets, Edinburgh and Cardiff. The Tipperary native has featured for the province 12 times this season after making his senior debut during the 2019/20 campaign.

Healy is currently in his third year of the Greencore Munster Rugby Academy and during his underage career, he captained Glenstal Abbey to their first-ever Munster Schools Senior Cup title in 2018. Healy, who plays his club rugby with Garryowen, also featured for the Ireland U20s during the Grand Slam triumph in 2019.

John Hodnett, who is currently in his second year of the Greencore Munster Rugby Academy, enjoyed a good start to the season with appearances against Edinburgh, Cardiff and Dragons before suffering a season-ending Achilles injury.

The Rosscarbery native is a product of Clonakilty RFC with the back-row producing some excellent performances with the Ireland U20s during the Grand Slam title win in 2019 and subsequent World Championships in Argentina. The 22-year-old made his Munster debut during the 2019/20 season and plays his club rugby with UCC.

Commenting on the contract announcement, Head Coach Johann van Graan said, “Off the back of the great news about Peter’s IRFU contract this morning, it’s a further boost for the province that we can add these latest names to the squad roster for next season.

“Securing the continued services of quality players such as Mike, Gavin and Neil allows us to focus on our future planning and objectives for this group.  They are an exciting dynamic trio who add huge value to the squad.

“In terms of the younger lads it’s always great seeing the next generation of players stepping up and reaching their potential, and it’s credit to the work that’s carried out in clubs and schools that helped them to get to this point.”