WITH clear evidence that coronavirus infections across the UK are falling sharply, the PM will set out his blueprint from lockdown.

Boris Johnson will tell the nation on Monday, February 22, about the reopening of schools, golf courses, pubs and more, thanks to the combined success of the jab rollout, and restrictions.

Boris Johnson will speak to the nation on Monday, February 22[/caption]

What could Boris Johnson announce in his roadmap out of lockdown?

The PM is expected to lay out a four-step plan to lead Britain back to normal life when he addresses the nation from 7pm at Downing Street on Monday, February 22.

His wide-ranging announcement will cover the return of outdoor sport.

Team games including football, rugby and hockey will be allowed – possibly from the end of March.

Schools will reopen from March 8, although the government may opt for a staggered return following a backlash from teaching unions.

Brits will also be able to socialise outside with a friend or relative from another household, with current regulations limiting meet-ups to exercise only.

This will be followed by an end to restrictions on close family interaction, meaning children will be able to hug their grandparents again.

Care home residents will also be able to hold hands with visitors within a few weeks, with full guidance set to be issued in the next fortnight.

Later in April, non-essential retail is expected to open should the infection rate continue to remain stable.

However, the hospitality industry is not set to reopen fully until May – yet pubs could be allowed to serve pints outside before this date.

Brits should be able to enjoy drinks alfresco outside from April if cases continue to fall at the current rate.

The “rule of six” limits and two-metre social distancing rules are also likely to stay throughout summer.

When can I see family and friends?

The Sun has recently revealed that the measures the PM is set to announce will include two households being able to meet up outside from Easter.

Under Mr Johnson’s plan, two households will be allowed to socialise outdoors from Easter.

Mixing in parks and possibly gardens are set to be announced, allowing families to see each other for the first time since January.

Brits will be able to socialise outside with a friend or relative from another household, with current regulations limiting meet-ups to exercise only.

This will be followed by an end to restrictions on close family interaction, meaning children will be able to hug their grandparents again.

Care home residents will also be able to hold hands with visitors within a few weeks, with full guidance set to be issued in the next fortnight.

Current restrictions allow you to meet with one other person while exercising locally outdoors – or indoors if you have formed a support bubble.

Discussions about reintroducing the Rule of Six so groups of half a dozen people from different households can meet from Easter too are also said to have taken place, although it’s not been confirmed.

The PM is rumoured to have been persuaded to axe the much disliked tier system.

It’s believed that he is scrapping the tiers and implementing a four-step plan to carefully staged normality instead.

Decisions will be dependent, however, on the continued fall in death and infection rates. That’s to lessen the likelihood of a fourth lockdown, should cases and fatalities spike again.

A Whitehall source said: “There will be four steps, possibly five, each with dates and details about what businesses can reopen and which activities will be allowed.”

Many experts believe the unpopular 4 tier system did little to prevent the spread of the virus, especially the highly infectious Kent variant.

Professor Neil Ferguson, from Imperial College London, said the data on vaccine effectiveness and how quickly infection, deaths and hospital cases were declining across the country was looking promising.

Agreeing that the current lockdown should be lifted in stages, he added: “I am encouraged by the cautious approach being taken.

“An incremental approach which I think will be adopted, namely relax one thing and see what the impact is, relax again.

“And it still may well be that by the end of May, we’re in a very different country than we are today.”

Figures show a continued decline since Christmas in the number of new cases of coronavirus, although rates vary according to region.

When will schools reopen?

The PM wants schools in England to reopen on March 8 and for children across all age groups to get back into the classroom at the same time.

But a coalition of unions and professional bodies warned that reopening schools to all pupils in England at the same time would be “reckless” and could risk another spike in Covid infections.

There have been reports, too, that Prof Chris Whitty, England’s chief medical officer, has been resisting Mr Johnson’s plans for a “big bang” reopening of schools.

The Guardian wrote that he was “very unhappy” with the idea of all ten million pupils and staff returning to schools.

But, Downing Street is extremely keen for all schools to reopen.

Labour leader Sir Keir Starmer has rejected pressure from unions to call for a phased return of schools, and said he hoped Mr Johnson would set out a “cautious, careful” exit from lockdown.

He told Sky News’ Sophy Ridge on Sunday: “Ideally, I’d like to see all schools back open on 8th March and all children back in school on March 8.

“I’ve been worried through the pandemic about the impact that being out of school has on particularly vulnerable children and the attainment gap is getting bigger.”

Some children in Wales and Scotland are due to return to school next week before a full reopening on March 15.

When will gyms reopen?

At present there is no indication or speculation as to when gyms and sports centres are likely to reopen.

The Prime Minister is expected to reveal more when he unveils his roadmap out of lockdown on Monday, February 22.

Despite the closure of gyms, many are calling for them to be reopened when lockdown restrictions are eased.

A petition to “Open gyms first as we come out of lockdown & fund a Work Out to Help Out scheme” has received over 179,000 signatures.

Bars, restaurants, gyms, schools, hair salons and all nonessential shops have been closed while grocery stories, pharmacies and takeout food venues are still open during the third lockdown.

Dwayne Johnson is a committed gym-goer[/caption]

When will pubs and restaurant reopen?

Mr Johnson has said that pubs, restaurants and leisure venues will be among the last to reopen.

The Sun has previously revealed pubs and restaurants will be able to serve outdoors in April if Covid cases continue to fall.

Thirsty punters may have to wait until May to sup pints inside pubs.

Indoor service could resume along with the rule of six, possibly with two households to start with.

Anyone who needs a haircut may face a similar spell of time before they can get a professional trim.

Senior sources told The Sun the beauty industry still “have some time to go” before they can re-open.

Hairdressers may not reopen until late April, with close-contact treatment like waxing and pedicures “where contact is inherent” delayed over longer.

When will shops reopen?

Early reports suggest retailers will be able to welcome back customers from March – a few weeks after schools reopen.

However, the rumoured reopening of shops and non-essential businesses still remains unconfirmed – but more will be revealed when the PM unveils his roadmap on February 22, 2021.

All non-essential stores, such as homeware, clothes and toys shops, are currently closed under the shut down restrictions.

Businesses that must close in England's third lockdown

These businesses must shut during the third lockdown:

Only essential retailers are allowed to stay open, including supermarkets, newsagents and bike stores.

If infections are at an “acceptable level”, the PM will give the green light for non-essential shops to open again towards the end of next month.

They are allowed to stay open for click and collect services though, although John Lewis stopped offering the service to encourage Brits to stay at home.

When will hotels reopen?

Hospitality businesses including hotels could open their doors again in England from the Easter weekend if the R rate remains low up to April 2.

It would mean the return of the staycation – although international travel would still likely be on hold.

Some hotels are now open for people returning from countries on the red list who have to quarantine there for 10 days – paying £1,750 per person.

When can I go on holiday abroad?

There have been reports that the government is looking at bringing in international vaccination passports to allow trips abroad.

No details have been set out yet, though, for when Brits can go overseas for their long-overdue hols. 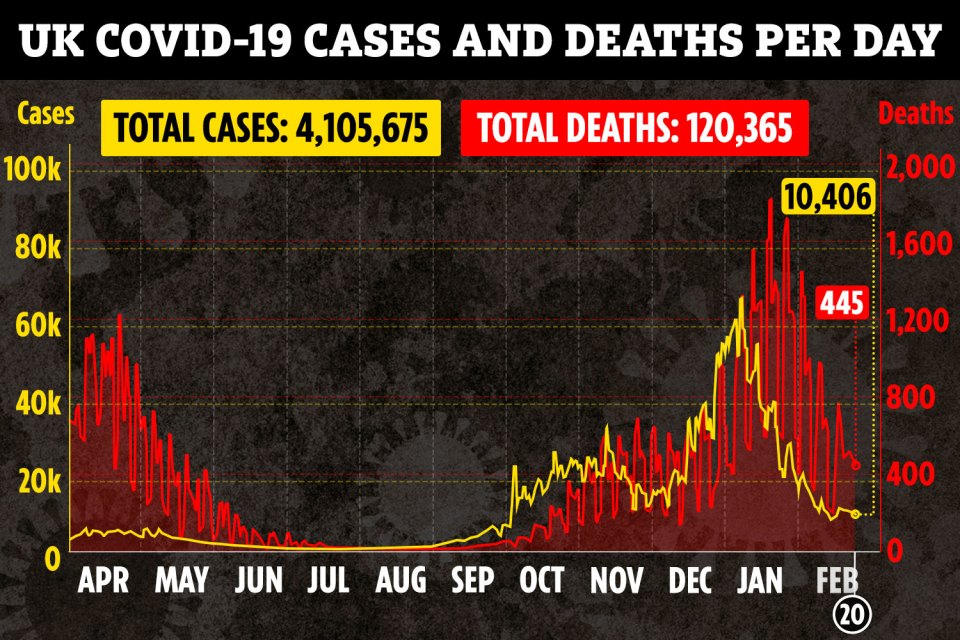 What is the criteria that must be met to ease lockdown?

The main criteria to ease the third lockdown is to ensure the NHS can cope with the number of infections and hospitalisations – making sure intensive care units are not overwhelmed.

It is also important to register a consistent fall in daily death rates and that the rate of infection is decreasing – with the R rate remaining below 1.

Another important criterion is that there is good supply of personal protective equipment (PPE) and enough testing capacity.

Last but not least, there must be confidence that any easing of restrictions will not cause another spike in Covid cases and deaths – which could spark the need for another lockdown or increased restrictions.

When is Boris Johnson announcing his roadmap?

Boris Johnson will lay out his roadmap for lifting Covid restrictions from 7pm at Downing Street, on Monday, February 22.

Most read in News

Thousands of fans could be allowed at Euro 2020, Wimbledon & music festivals