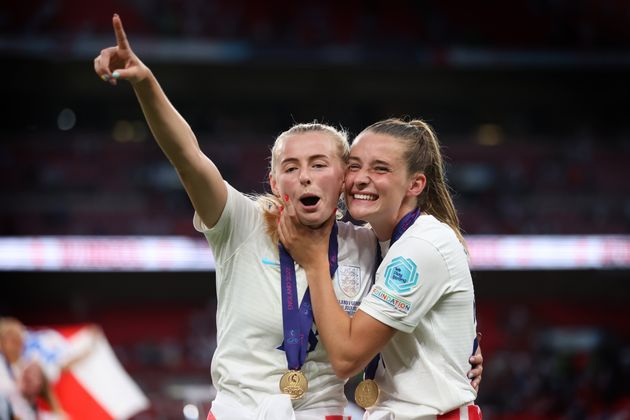 As the crowd roared in celebration of the Lionesses’ 2-1 victory against Germany, even the steeliest of football pundits couldn’t hold back their tears.

It was a momentous occasion for English football, but particularly for women’s football, which up until now has been severely underfunded and – let’s face it – discriminated against, purely based on the fact it’s women kicking a ball about and not men.

Just 63% of schools currently offer girls’ football in PE lessons, according to the FA, and only one third of girls aged 5-18 participate in football every week.

But change is (hopefully) now very much on the horizon. England’s Euros win is being hailed as a defining moment, with footballers past and present calling for more academies, greater funding and better access for fans so they can actually turn up and watch their teams in action.

The interest is there: almost 90,000 fans turned up to watch the Lionesses bring it home at Wembley, with roughly 20 million more tuning in from home.

As the Lionesses celebrate their victory on the pitch, women have been reflecting on the access they had to football growing up – and if this doesn’t show why change needs to happen now, we don’t know what will.

So many women were forced to stop playing football because they were told they couldn’t compete against the boys.

When I was 11 I went to one football practice at secondary school and was swiftly told I wouldn’t be allowed to play anymore because I couldn’t play vs the boys and no other girls would play. Today my 11 year old niece is at Wembley with her club and just saw England win! #eng

YES GIRLS!! when my male pe teacher said i couldn't play football and never included me in the "boys" football games. WE ARE PROVING HIM WRONG!! WHAT A GOAL

At school I played football and was the only girl on the team. After a bad match one of the dads would always say “you played like girls today”. When I was 11 I had to stop because you weren’t allowed to play with boys anymore & there weren’t any girls’ teams. Thankyou #Lionessespic.twitter.com/FRZKkMiuPs

Lack of girls’ teams in schools meant football became incredibly hard – if not impossible – to pursue.

When I was 8 I was told that I couldn’t play football any more with boys, even though I was the best player in junior school. Hopefully the England team’s win will make football in schools for girls much more accessible.

We girls were not allowed to play football at school. I’m not ancient, this was the eighties. Recent. We weren’t even allowed to wear trousers ffs. And so my face is wet at this win, with joy and also for all the Lionesses that never were. #itscominghome#Lionesses

Girls have been bullied, body-shamed and even faced violence for trying to compete.

I started playing football at 10 years old as the only girl on the boys team.

When I went to secondary school I got bullied for playing football and called a man.

I asked my PE teacher if we could play football. She told me that football was not for girls as it made our calves big. I hope you watched last night Miss Pugh.

This one's for my daughter who dribbled past a boy in her primary school playground so he punched her in the head. This one's for every girl who's fought to play football - over decades. #Lionesses

In 1999 my primary school headmaster did a football lesson & laughed at girls like me who “couldn’t kick the ball”. At secondary, it wasn’t an option in PE. Well, football *IS* for us! Let’s end the systemic exclusion of girls from our biggest national sport! GO LIONESSES !!! ???? pic.twitter.com/FdAKObPixX

Lack of access meant others were forced to play in public spaces – and leered at in the process.

Honestly ffs girls PE has to change. It feels like✨humble brag✨ but I legit ran London marathon last yr in memory of loved ones. Never once at school was football an option. We played ‘PE’ in parks where men stared at us. It was horrible.

Let this be real change.

But the future looks bright for women’s football and for little girls everywhere who want to be the next Chloe Kelly.

I asked my daughter if she played football at school she said no. All girls. She said 'I could of been amazing I just don't know'. #Lionessess just opened that door wow what an achievement #engpic.twitter.com/Wp2CpegW1S

For every comment 'they've got a girl' & 'girls can't play football', every PE lesson that I had to play netball whilst the boys played football & every penny I paid to play, even for a club like Tottenham, whilst working full time. It'll be different for the next generation ????

This makes me feel so bloody positive about the future of womens’ football. It’s amazing to see. Most of us girls grew up not allowed to join in at school with ‘boys’ football but for a new generation of girls, the world is their oyster! pic.twitter.com/MErb1pVjTk