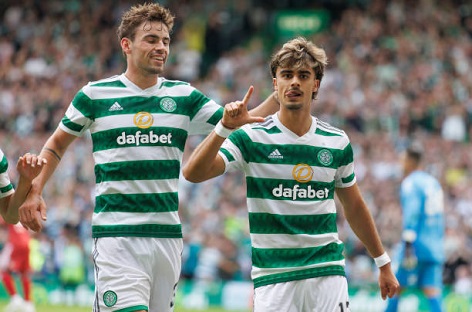 The Scottish Premiership kicked off this weekend and for Portuguese star Jota it was a case of picking up where he left off at the end of last season with defending champions Celtic.

The former Benfica man scored a wonderful goal as the Hoops beat Aberdeen 2-0 at Celtic Park, having made his previous loan deal from the Lisbon club permanent this summer following tremendous form last term.

Stephen Welsh put the hosts ahead with just three minutes played, while Jota’s clincher did not arrive until fifteen minutes from time. The 23-year-old received possession 25 yards from goal and dribbled the ball onto his left foot, before unleashing an unstoppable shot into the top corner to put the seal on Celtic’s victory.

What a goal by Jota! He’s back. pic.twitter.com/33hOJsHCLG

Despite his goal, Jota did not avoid a slightly critical analysis from Celtic boss Ange Postecoglou, who told reporters post-match: “We know Jota has that quality in him and he’s a fantastic talent but he’s one of the ones where I thought in the first-half, especially in the last 15 minutes, went away from what we do, and he needs to make sure that he’s always performing at the levels that we know he can.

“And I thought he addressed that in the second-half. It was much better and he scored a fantastic goal.”

Last season saw Jota named in the PFA Scottish Premiership Team of the Year, having helped his side to a Premiership and League Cup double with 13 goals in all competitions. The Glasgow club paid Benfica around €7.5m to make the deal permanent at the end of June.