FOOTBALL fans have been left fuming as coverage of the FA Cup final between Liverpool and Chelsea keeps “freezing” and “stuttering”.

Both the BBC and ITV are showing the all-Premier League clash at Wembley.

The BBC’s coverage started at 4pm and is being hosted by Gary Lineker with analysis coming from Alan Shearer and Micah Richards.

ITV’s coverage got started at 3.45pm with Mark Poutgatch presenting.

However, fans have taken to social media to complain about “freezing” and “stuttering” on the game’s stream. 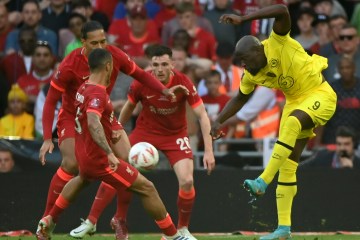 Alonso RATTLES the crossbar as Chelsea ramp up pressure at Wembley

One fan said: “What is going on with the FA Cup final!! BBC and ITV both channels are stuttering constantly.”

Another tweeted: “Anybody else’s picture keep freezing on @virginmedia for the cup final BBC and ITV?”

Sky responded to viewers’ questions on the issue.

They responded, saying: “Our teams are aware of this issue and are investigating to get resolved asap, we’re really sorry for the inconvenience this causes.”

Chelsea and Liverpool are meeting in a domestic cup final at Wembley for the second time this season.

The two teams met earlier this year in the Carabao Cup final, which Liverpool won on penalties.

Jurgen Klopp’s Reds are chasing a historic quadruple with the FA Cup, league and Champions League titles still to play for.