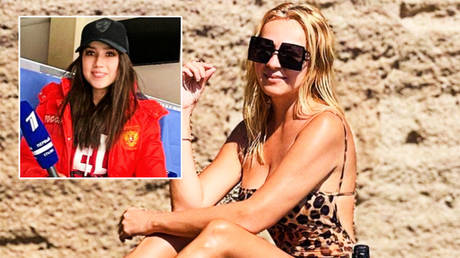 The producer wife of two-time Olympic figure skating champion Evgeni Plushenko has cast doubt on Alina Zagitova's alleged row with the media and spoken of the perils of being a celebrity attending events.

Olympic champion Zagitova issued a heartfelt response after she was alleged to have "rudely" told the press to leave her alone while attending a hockey game, admitting to her vast following that she often feels her rights are breached when she is out in public.

The much-loved 19-year-old was said by a journalist to have demanded to have photos of her, reportedly taken while she watched the game, removed – with the allegations even claiming that the ice queen had issued a warning that she had "connections".

Now glamorous Yana Rudkovskaya, who knows all about the trappings of fame courtesy of her immense status and wealth, has offered an insight into the pitfalls Zagitova may have experienced.

"If I go to some events, they take pictures of me," the co-organizer of Plushenko's famed skating academy told news.ru, calling attempts to deter prying cameras "impossible".

"You are walking down the street, in a public place, at a show. Take Wimbledon. There are always a lot of stars in the forefront.

"Everyone is photographed, whether they want it or not. If you are sitting in the podium, you must be prepared that you will be filmed.

"I am surprised by what Alina Zagitova [allegedly] said. I don't know how true this is.

"If you come to an event, if you are a celebrity who is loved by millions, you should be ready for the fact that you will be photographed: fans and journalists will approach you."

Former world gold medalist Zagitova seemed more affected by the "hate" she receives online, adding that the media "write strange articles" and "pick apart the bones [of] what I said, what I wore, where I went."

"There is no privacy," the starlet rued. "My boundaries are often quite rudely violated."

Often portraying herself boarding jets, posing with sports cars or in exotic locations, Rudkovskaya has had her own run-ins over her privacy and the lives of her children.

The 46-year-old received some criticism earlier this year for appearing to ask her followers which of a selection of Porsche cars she should take to a ceremony, and believes Zagitova should avoid events or take minders if she wants to ease her worries.

"I go to such events, like my husband, with security, so that there are no provocations either from the press or from anyone," she acknowledged.

"I don't think [Zagitova] said that [alleged threats to the press]. Words can be exaggerated. I admit that there could be an obvious dissatisfaction on her part with what happened.

"In this situation, I do not see any violations on the part of the press because the journalist did his job accurately – this is his profession."

Rudkovskaya headed to Paris at the weekend on a trip with luxury fashion brand Louis Vuitton, staying at the Cheval Blanc hotel, which usually charges around $1,300 a night for a room.