Crucial decisions about Paris 2024 were rubber-stamped and fresh details of how the Games will look revealed at the FEI General Assembly (13 November).

FEI president Ingmar de Vos voiced a stark reminder of what rests on the shoulders of the Paris Olympic and Paralympic Games in his opening speech.

“We have an incredible sport and the IOC [International Olympic Committee] recognises the value of equestrian [sport]. But we are only as good as our last Games,”he said.

“And we are judged on our performance, so we need to continue to keep our sport safe, attract new fans, engage youth and to do what is necessary to appeal to a global audience. Like all other sports in the Olympic programme, we are constantly under review. And again – context is everything – as we have to compete with new sports, new media landscapes and new trends.”

But while eyes are focused on Paris, the wheels of the bigger picture of horse sport’s place in the youth-focused Olympic movement are turning.

Mr de Vos said ensuring horse sport remains in the Olympic and Paralympic programmes is one of the FEI’s “biggest priorities”.

IOC president Thomas Bach visited the eventing World Championships at Pratoni, and was said to be “very complimentary” of the sport “and the willingness of our community to embrace change”. Mr de Vos and FEI secretary general Sabrina Ibáñez have also travelled to Los Angeles to meet the organising committee for the 2028 Games and identify an equestrian venue that “ticks all the boxes”.

“But it will be based on our performance in Paris that our events and disciplines will be confirmed for Los Angeles 2028,” said Mr de Vos.

“As you all know, one of the biggest challenges for us, but also many other sports, is around broadcast figures.

“There were issues with Tokyo 2020, as many fans were unable to find or understand where they could watch our sport, on top of the unfavourable time zone differences. This is something we have already started to address, and will actively work to mitigate for Paris, and ensure equestrian fans and new audiences know where to watch our sport during these Games.”

He added: “The future is on everyone’s lips – and although this future seems to be uncertain, there is one certainty: The youth of today will become the future of equestrian tomorrow. And they already dictate the popularity of sports online. This is a key demographic we must invest in and listen to.”

Paris features a major timetable shake-up – and a new approach to testing the venue’s readiness.

The cross-country course at Versailles will be tested in September 2023, complete with horses and riders. But the testing process in terms of the organising team, arena footing and field of play, will take place off-site some 70km away at Fontainebleau in April 2023 and 2024.

The Olympic equestrian events start on 27 July 2024 (see full timetable, below). Eventing dressage has been condensed into one, long day – as opposed to being split over two shorter days, as has previously been the case. 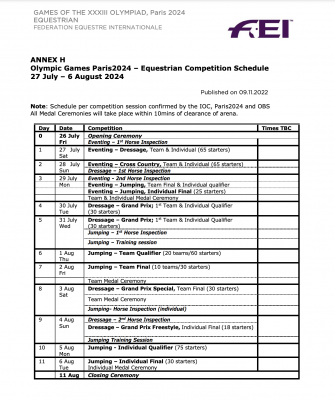 The competition rules were given the official nod by national federations at the general assembly. Aside from the timetabling, these are broadly similar to Tokyo. Teams of three are here to stay, which was already confirmed, but minimum eligibility rules have been tightened, amendments to how ties are split redefined, and there are also tweaks to the pre-competition competitor changes and substitution rules.

Ms Ibáñez sounded audibly relieved as she told the general assembly an organising team to deliver the equestrian events at Paris had, finally, been appointed with the contract going to GL Events.

Fresh details on how the main arena and Pierre Le Goupil’s Paris 2024 cross-country course will look were revealed in a virtual update by the Paris organisers.

Designs showed the spectacular Grand Canal at the heart of the course, with the intended route looping around it and featuring two pontoon crossings.

GL equestrian director Sylvie Robert told the forum that the Etoile Royale esplanade, at the far end of the Grand Canal, is where the grandstand and main arena will be.

She added that these will be “fully integrated into the landscape to protect the site” and a “very large part of the park will be dedicated to the cross-country track”.

The course features 25 numbered fences, including three water complexes, over a distance of 5,300m with an optimum time of 9 minutes 18 seconds – this is longer than Tokyo, where the course was shortened owing to the climate and horse welfare considerations.

“Our ambition is very clear. To deliver spectacular competition in the best possible conditions for both horses and riders,” said Paris 2024 sport competition director Aurélie Merle, adding that the vision is for a “more responsible and sustainable Games that inspire and engage the whole world”.

Credit: Future
The Palace of Versailles, with the Apollo Fountain in the foreground, which sits between the grand canal and the palace. The Paris 2024 Olympic and Paralympic equestrian venue will be located at the far end of the canal, with views up towards this aspect. Credit: Alamy Stock Photo
UK Sport has allocated an extra £700,000 to the indicative funding revealed in December 2020 to help British riders prepare for the Paris 2024 Olympics and Paralympics Credit: Peter Nixon
The Palace of Versailles, where the equestrian events at the 2024 Paris Olympics will be held Credit: King of Hearts/https://creativecommons.org/licenses/by-sa/4.0/

Dressage, eventing and showjumping, plus the full quota of 200 combinations and six medal chances, have been confirmed for the

Germany, the USA and Great Britain on the podium at the Tokyo Olympics. Credit: Peter Nixon
The Palace of Versailles, with the Apollo Fountain in the foreground, which sits between the grand canal and the palace. The Paris 2024 Olympic and Paralympic equestrian venue will be located at the far end of the canal, with views up towards this aspect. Credit: Alamy Stock Photo