Mention “white horses” to most equestrians, and they’ll correct you that the vast majority of seemingly white horses are actually grey, typically born dark and growing greyer as they age. However, there is another type of white horse that has remained the same colour for millennia. Around Britain, the shape of horses have been carved into chalky hillsides, creating large white horses visible from miles around. The south-west of England has more white horses than anywhere else in the world, thanks to the chalky soil and rolling terrain that makes it so suitable for viewing this rural art. And contrary to oft-held opinion, most of Britain’s chalk horses are not prehistoric – the majority of the ones we can still see today were cut in the past 250 years.

Carved into Britain’s hills, there are 16 official white horse figures – known as geolyphs, large designs formed on the ground using elements of the landscape. There are also many more that have been lost over the years, as they require regular maintenance to keep their form, as well as small replicas. There’s even a word coined to describe the art of carving white horses into chalk upland areas: “leucipotomy”.

The oldest of all Britain’s chalk horses is the Uffington White Horse, situated in Oxfordshire on the Berkshire Downs near the Ridgeway, and now owned by the National Trust. The figure, which can be viewed from 20 miles away as a landmark in the centre of England, is an abstract stick horse cut into the chalk soil. It is 110m long, and in its abstract, stick-like form, is viewed as a masterpiece of minimalist art.

Archaeologists believe that the Uffington horse dates back to the Bronze Age, nearly 3,000 years ago. They knew it was ancient as it is mentioned in 11th- and 12th-century manuscripts, and the shape of the horse is similar to those on coins from 2,000 years ago and in Celtic art. However, archaeological dating – using a technique dating the layer of quartz in the trenches making up the shape – shows that it is more likely to be around the end of the Bronze Age to the beginning of the Iron Age.

No one knows exactly why these original horses were first made. Its strategic position on the Ridgeway, Britain’s oldest road which connects other Bronze Age landmarks such as forts and burial mounds, means it may be a symbol of an ancient tribe staking land rights. Legends abound, such as the horse’s continuing connection to King Arthur, an idea that the horse may move or dance during the night or some major life-changing event. And if you want to make a wish, you’re supposed to stand near the horse’s eye, close your own eyes and turn round three times…

It is some feat that the Uffington White Horse has endured for thousands of years. If left to themselves, grass and weeds will grow over the geolyph, as well as the weather gradually eroding the chalk. In bygone times, regular cleaning – or “scouring” – is likely to have had some religious or pagan significance or an excuse for a festival, and there is historical documentation pertaining to this from the 18th century. Nowadays, the National Trust and English Heritage organise an annual cleaning event with volunteers. 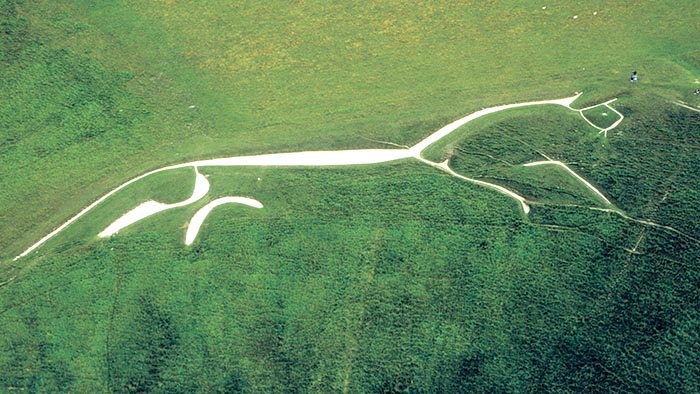 The eight white horses in Wiltshire

Some say 13 or 14, some say just seven, but the general consensus is that the county of Wiltshire has eight iconic chalk horses that we can still see today. This is many more than other county, and hence the white horse is known as Wiltshire’s unofficial symbol (the extinct bustard being the official one).

The “Westbury Horse”, on Westbury Hill, Bratton Down, is the largest and oldest, and probably dates from the 17th century although it was restored in 1778. It is realistically formed – apparently over the top of an older, more stylised horse that might have been originally carved at the same time at the Uffington one as this is a Neolithic site. This location may have had several chalk horse incarnations as historians believe that a horse was carved here in the 1600s to commemorate King Alfred’s victory in the Battle of Ethandun at Bratton Camp in AD 878, and its origins are obscure. 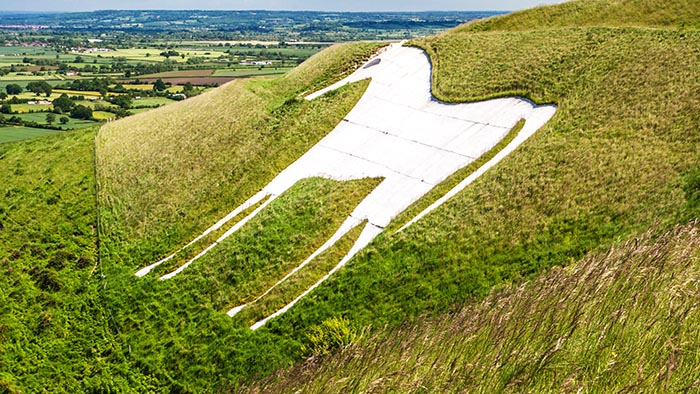 There are others at Cherhill, Marlborough, Alton Barnes, Hackpen, Broad Town, Pewsey and – the most recent – Devizes. The latter was carved in 1999 in celebration of the millennium, and is the only horse in Wiltshire to be facing to the right.

While these chalk-cut hill figures are predominantly in the south-west, Yorkshire’s Kilburn White Horse is the most northerly version. Unlike most of its southerly cousins, the Kilburn horse is cut into limestone not chalk, and therefore needs artificial whitening (either with whitewash or chalk chippings).

Kilburn holds the title of the largest white horse in surface area. It was carved into a hill in 1857 at Roulston Scar in the North York Moors National Park thanks to a local businessman, Thomas Taylor, who designed and financed it after being inspired by the Uffington prototype. It was cut out by the village schoolmaster John Hodgson and his team of volunteers. On a clear day, the Kilburn horse is visible from as far as 45 miles away in North Lincolnshire. 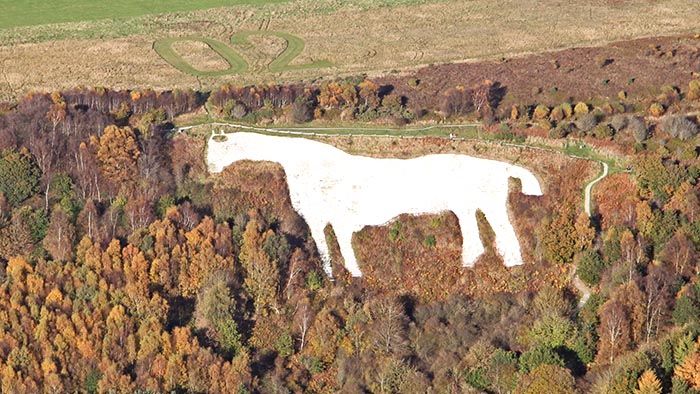 The Kilburn horse is the largest white horse in the UK

Another limestone horse was sculpted into the hills near Weymouth, Dorset, in 1808, the Osmington White Horse. This depicts King George III riding his horse Adonis, and some say that as he is shown riding away from Weymouth, he was not welcome there. Others say he was a regular visitor to the town and made it Britain’s first resort. Either way, the hill-cut version needed a major spruce-up before Weymouth hosted the sailing events at the 2012 Olympics. 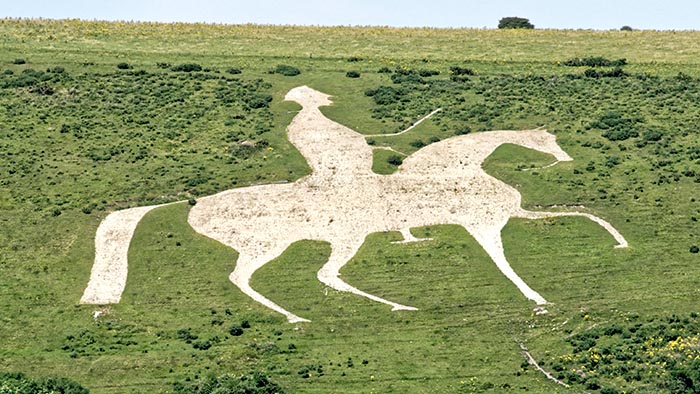 Although the white horses are seen as identity badges, proud landmarks in Britain’s rolling hills, during the war most of the horses were covered over with branches and greenery to prevent them from being used as a navigation aid for German bombers.

A former vet has caused controversy by saying the famous white horse in Uffington could in fact be a dog.

From constantly being covered in grey hair, battling with stable stains and spending hours washing and rewashing the same section