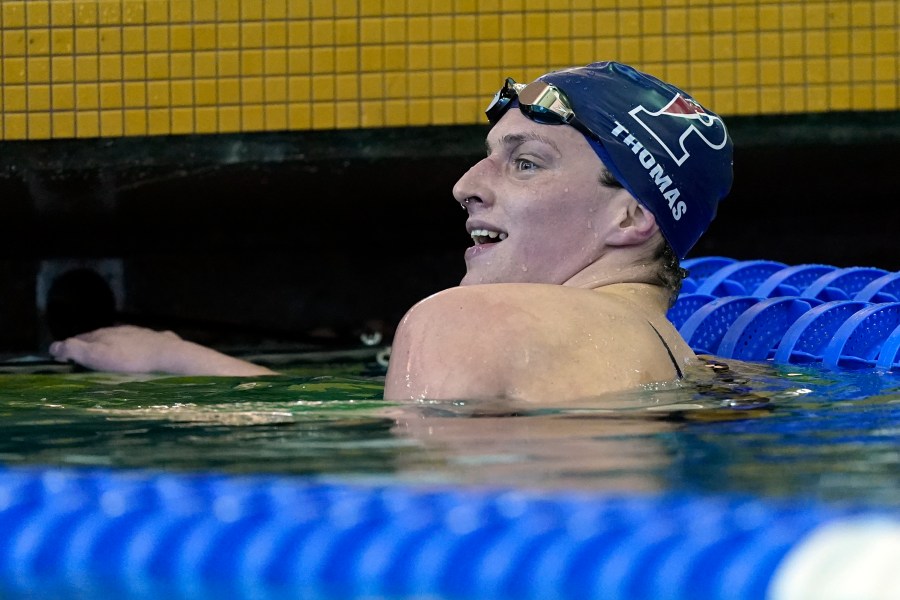 ATLANTA (AP) — Lia Thomas took control in the final 100 yards of the 500-yard freestyle to make history Thursday as the first transgender woman to win an NCAA swimming championship.

Thomas, the University of Pennsylvania senior who entered the NCAA women’s swimming and diving championships as the top seed, had a season-best time of 4 minutes, 33.24 seconds.

“I didn’t have a whole lot of expectation for this meet,” said Thomas, a former male swimmer for Penn State. “I was just happy to be here and race and compete the best I could.”

Thomas is from Austin and a graduate of Westlake High School.

The race was close until the final 100 yards, with Weyant and Erica Sullivan of Texas pushing Thomas for the lead. The three swam in lanes three through five, adding to the drama, with Thomas in the middle.

As was the case in Thursday morning in a preliminary win, Thomas was stronger at the end. She won the preliminary race at 4:33.82.

Thomas has followed NCAA and Ivy League rules since she began her transition in 2019 by starting hormone replacement therapy.

The inclusion of the transgender swimmer created controversy, even within the sport. There were fewer than 10 protesters outside the Georgia Tech facility, and some carried banners which read “Save Women's Sports” in the stands.

“I try to ignore it as much as I can,” Thomas said. “I try to focus on my swimming .. and just try to block out everything else.”

Thomas spoke with ESPN immediately after the race but would not participate in the official news conference, as required by the NCAA. Since participation is required, possible action could come following evaluation by the NCAA's swimming and diving championships committee.

Tennessee's Julia Mrozinski won the consolation final with a time of 4:37.35. Northwestern's Lola Mull was second.

Virginia has the team lead with 218 points while Texas is in second place with 128 points, five points ahead of Stanford.

UT's Kelly Pash placed fifth in the 200 IM, as the sophomore posted a career-best time of 1:53.31 to claim All-American honors in the event for the second-straight year. Pash’s time moved her into second on all-time in program history.

The Longhorn quartet of sophomores Grace Cooper and Emma Sticklen, Pash and junior Bridget Semenuk closed out the night tying for 12th in the 200 free relay, earning honorable mention All-American accolades with a time of 1:27.84.