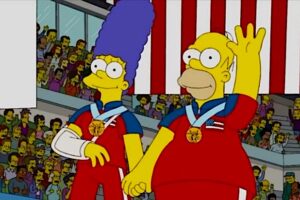 “The Simpsons” has an eerie knack for predicting the future, from Donald Trump’s presidency to the U.S. Winning an Olympic Gold Medal in Curling. Here are 14 times the long-running comedic series got it right.

On the episode “Lisa Goes Gaga,” Lady Gaga is shown suspended by cables flying over the audience at a concert. Well surprise, surprise because at the Super Bowl LI’s halftime show, Gaga descended from the stadium’s roof with suspension cables wearing pretty much the same outfit on her episode.

In a 2010 episode, Milhouse predicted that Bengt R. Holmstrom would win the Nobel Prize in Economics and sure enough, in 2016 Holmstrom and Oliver Hart were announced as joint winners of the prize.

17 years ago in an episode titled “Bart to the Future” shows Lisa as president after Donald Trump apparently ruined the economy.

Homer Simpson tells his wife Marge that he plans to “Arnold Palmer” his pal Lenny.

He was of course referring to the lemonade and iced tea drink mixture — which was named after the golfer.

In 1993, an episode titled “$pringfield (Or, How I Learned to Stop Worrying and Love Legalised Gambling),” the show imitated a Siegfried and Roy where the magicians got attacked by their trustworthy tiger.

Well, in 2003 Roy was attacked by one of their white tigers during a live performance. He sustained injuries, but lived.

During the 2012 elections, a voting machine proved faulty when votes cast for Barack Obama went to Mitt Romney instead.

In a 2008 episode, Homer Simpson went to the voting booths to cast a vote for Obama, but … his vote went to McCain instead.

In 1994 an episode titled “Sweet Seymour Skinner’s Baadasssss Song,” the lunch lady was seen reaching into a barrel labeled “assorted horse parts” and putting the meat into the school’s lunch pot.

In 2013, it was reported that traces of horse DNA was found in beef products across the UK.

The now basically extinct but once popular video game Guitar Hero was first released in 2005.

But in a 2002 Simpsons episode, Mick Jagger and Keith Richards give Homer a jacket that has “guitar hero” printed on the back of it.

The virtual reality game, Farmville, was all the craze in 2009 with people rushing home from work or school to tend to their farm.

In a 1998 episode, “The Simpsons” shows a scene were kids are excited to play in a yard work simulator.

In Season 2’s episode 18, “Brush With Greatness,” Ringo Starr from the Beatles is shown responding to fan letters while saying: “They took the time to write me, and I don’t care if it takes me another 20 years. I’m going to answer every one of them.”

Sorry Apple, but The Simpsons had smart watches first.

In a 1995 episode, where the show is set in the future, Lisa’s husband is shown speaking to a phone on his wrist.

Back in 1998, a quick scene in “The Simpsons” showed 20th Century Fox as “a Division of Walt Disney Co.” And in March 2019, Disney completed its $71.3 billion acquisition of 21st Century Fox’s film and TV assets.

In 2010, Homer and Marge beat Sweden and took home Olympic gold for Team U.S.A. in Mixed Match Curling. As the animated sportscaster said, “Open your history books, tear out the pages and put this indelible Olympic moment in.”

In a 1993 episode, a Japanese factory worker accidentally spreads the contagious “Osaka Flu” to Springfield, and in the town peoples’ rush to find a cure, they accidentally knock over a van with killer bees inside. The spread of “murder hornets” in America has coincided with the coronavirus in 2020. The coincidence was first noticed by former “Simpsons” writer Bill Oakley.