AMIR KHAN plans to spend more time on the box after calling time on boxing.

It ends a career which started when Khan went to the Athens Olympics in 2004 as a baby-faced 17-year-old – the only Team GB ace to qualify – and became an overnight star.

He then burst back on to terrestrial TV in 2017 when he went into the I’m a Celebrity jungle.

That is where fights fans are most likely to see him next as he plans to return to the small screen and capitalise on the popularity he earned the hardest way.

He said: “I am one of the lucky ones in the sport who had the opportunities to do other things outside of boxing. 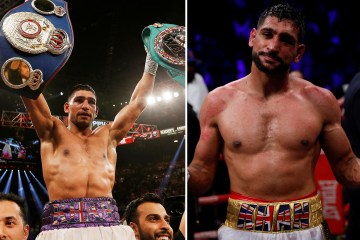 “I’m a Celebrity was amazing and there have been other TV shows I have asked to go on and, no I am retired, I can do these other shows.

“There were lots of things I couldn’t do before, because if boxing and not being able to risk getting injured.

“But now I am looking forward to doing those because that’s when I think people get to see the real you.

“Around fights you are forced to be around your opponent and sometimes you can say unkind things, in the heat of the moment.

“But I want people to see the real me which is a big softie, really.”

The Bolton idol revealed it was emotional talks with his family that made him look in the mirror and decide it was the right time to walk away.

He knew his boxing career was over when the hairs in his beard started to match with his Olympic silver medal.

Leaving a possible showdown with 24-year-old Conor Benn on the table, the Olympic runner-up revealed: “I was in the game for a very long time, 20 years of taking punches to the head.

“Even before the last fight with Kell my family was telling me to walk away because I have achieved everything I ever set out to do.

My partner is so lazy I have to leave money in loo roll holder, but it works

“Thankfully I can walk away now with my faculties intact, the last thing I would wanted would have been for my speech to start slurring or anything like that.

“But I’ve started to see the silver and hair grey hairs coming in my beard so I knew the time was coming!”