JOSHUA BUATSI has to go to war with Craig Richards while juggling a friendship with his light-heavyweight foe’s mum and sister.

The 29-year-old South Londoner has been frustratingly cut out of the world title scene thanks to injury and inactivity.

But his loss is British boxing’s gain as he will face his neighbour and promotional stablemate on Saturday at the O2.

And ice-cool JB – who lives by his Just Business mantra – explains how he will keep cordial with the Richards family while trying to wreck their 32-year-old boy’s impressive recent run.

The London 2012 bronze winner told SunSport: “I bump into Craig’s mum and sister around South London, they really support his career and they are really cool people.

“When I see them there are always warm greetings and respect. 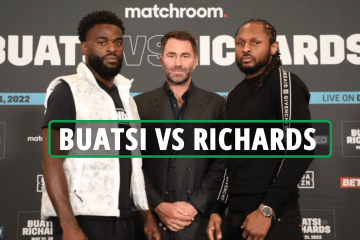 KING OF THE SOUTH

“Craig has just become someone that people want to see me fight and I am sure his fans want to see him fight me, so be it.

“But what we do in boxing is just what happens in that ring, for those however many minutes.

“Outside of the ring you need to be yourself and if that means being nice to people then it should not change.

“I would say, for me particularly, I am totally different as a person to how I am in the ring, away from boxing I am very chilled.

“When the bell goes I feel ‘it is time to fight, and I turn into business mode’.”

Buatsi has dragged himself away from his own family to commit to camps in San Francisco under training guru Virgil Hunter.

The laser-focused ace insists segregation away from Anthony Joshua’s 258 management firm and Team GB – where he is a popular figure at both – is part of his mental training.

“I could train anywhere in the UK or Europe and just be a couple of hours by car, train or plane from my friends,” he explained.

“Instead I choose to be a ten-hour flight away and eight-hours time difference behind everyone.

My partner is so lazy I have to leave money in loo roll holder, but it works

“Even making it difficult to have video and phone calls is part of the process.

“And I will make sure it is all worthwhile against Craig and everyone else.”