LAS VEGAS – There is one thing we can say for certain about Nick Diaz after UFC 266: He is simply not the same fighter he was six-and-a-half years ago.

How could he be? In the fight game, that’s an absolute eternity for a layoff, and when the stretch ends with you returning to the cage at 38, the odds of giving a prime performance aren’t exactly in your favor.

There were signs of what to expect throughout the week leading up to Diaz’s heavily anticipated rematch with Robbie Lawler at T-Mobile Arena. That the Diaz team requested the fight be moved from welterweight to middleweight was a massive red flag. After all, this is the man who once showed up at an official weigh-in ceremony for a card in which he was not involved and openly taunted a clearly withered Johny Hendricks as he struggled to make 170 pounds for his UFC 181 clash with Lawler.

Now he’s comfortable with a 15-pound adjustment just days before a fight? That’s not the same Nick Diaz.

That Diaz (26-10 MMA, 7-7 UFC) skipped media day was no real surprise (motherf*ckers). The 20-year veteran has made it clear for most of his career that he’s not in this for the camera time.

While it was another warning sign, his limited pre-fight comments, in which he told ESPN “I don’t know why I’m doing this,” weren’t overly concerning for those who have closely followed his career. After all, Diaz has long expressed his love-hate relationship with prizefighting – and he also immediately said afterward that rather than Lawler, he would have been better suited to face UFC welterweight champ Kamaru Usman, the man who currently sits as the No. 2 pound-for-pound fighter in the world in the USA TODAY Sports/MMA Junkie official rankings.

But on fight night, it was clear this was a different fighter. That became painfully evident even as he made his way to the cage.

Given the honor of a championship walk by the UFC, a true sign of the respect Diaz has generated during his Hall of Fame-worthy career, he was second to arrive. With Lawler already in the octagon, Diaz walked by, took one quick look into the fighting surface, and then immediately turned his gaze toward the floor. Compare that with the last time Diaz was in the red corner, when he stared a hole through Carlos Condit prior to entering the cage for their 2012 interim welterweight title fight.

Robbie Lawler says Nick Diaz didn't quit at UFC 266: 'It was a lot of damage'

Nick Diaz reacts to UFC 266 loss to Robbie Lawler: 'I knew I had it coming'

Once inside the octagon, Diaz did pace back and forth in his customary pre-fight routine, but the menacing scowl we’ve all come to love? It just wasn’t there – and what’s a Diaz fight without a little mean-mugging?

As the fight began, it was clear Diaz had lost a step. Never known for his blazing hand speed, it nevertheless looked like many of his movements were labored and a touch slower to reach the target than in previous bouts.

For all the differences, though, one truth remained the same: Diaz is a real fighter. Despite sometimes appearing to be stuck in first gear, Diaz threw an incredible 176 strikes in the opening round, followed by another 145 in the second. He stood toe to toe with Lawler and gave fans a show.

That said, it was the ending of the fight that undoubtedly gives the most pause for Diaz’s career moving forward. With momentum clearly shifting in Lawler’s favor, “Ruthless” landed a big right hand that dropped Diaz to a knee. A grazing uppercut followed, sending Diaz to his back, at which point Lawler turned and walked away, declining to engage the Cesar Gracie black belt on the floor. When referee Jason Herzog directed him to return to his feet to continue, Diaz declined. 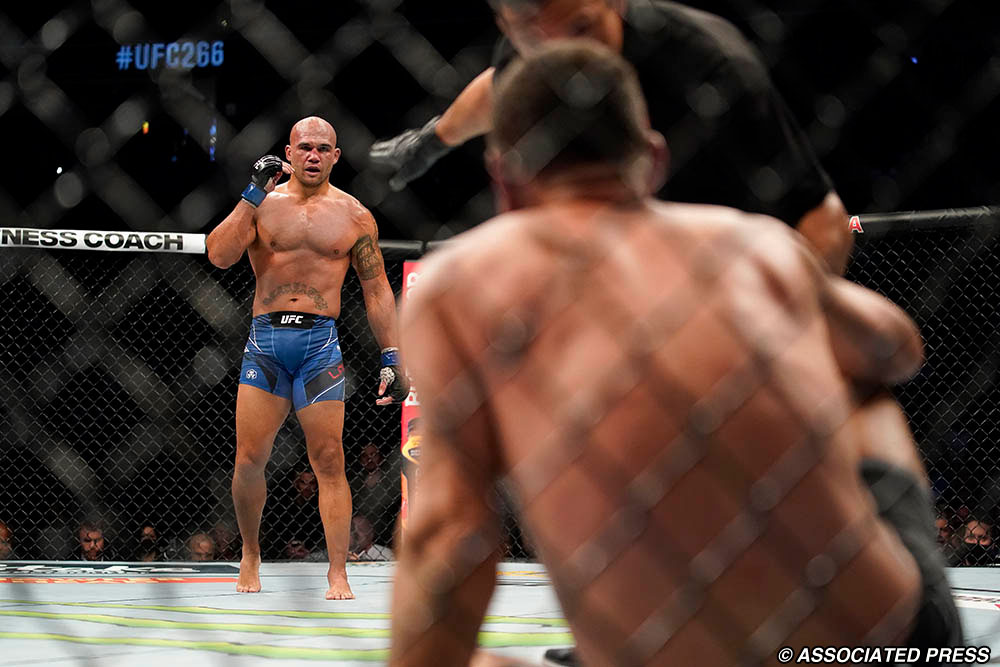 Electing to stop fighting? This, certainly, was not the same Nick Diaz.

With his busted nose still spewing blood, Diaz opined that “I knew I had it coming.” Was that an admission from Diaz that he knew he was facing an uphill battle all along? Unfortunately, it’s often hard to know the exact context of what the former Strikeforce welterweight champion means with almost anything he says, so we might never know for sure.

As ESPN’s post-fight broadcast crew played matchmaker moving forward for Diaz, the two names that were mentioned included a 43-year-old Demian Maia, who was recently released from the promotion, as well as Ben Askren, who retired from the sport in 2019 and has mechanical replacement parts in his hip. It’s not exactly a glowing endorsement for Diaz’s potential success moving forward.

Therein lies the difficult choice for Diaz. There’s clearly something left in the tank, but how much? Matchmaking the aging superstar would require careful consideration should he elect to carry on. At this point, Diaz has done too much in his career to be simply rolled out as fodder for some Dana White’s Contender Series graduate to use to make a name, but it’s also clear that he doesn’t quite have what it takes to be competitive with the division’s best.

A pairing with welterweight champ Usman? That would be downright criminal.

And so there is no clear-cut next move for Diaz right now. That will have to come from inside, and hopefully he’s willing to stand up and be the one leading the charge, whether it be to continue competing or to walk away from the sport after a financially successful but ultimately failed comeback. But listening to Diaz say again after that bout that “I don’t know how this fight got set up” sounds a whole lot like a guy who was told to fight rather than one who truly wanted to fight.

In the end, Diaz’s final words before leaving the cage rang true: “I’m glad to be back. I’m glad I put on a little show for you.”

If nothing else, Diaz is certainly capable of putting on a show. The Nick Diaz Army was in full effect throughout the week, and Stockton’s finest remains one of the most popular fighters on the UFC roster. Hopefully the “switch-up in my whole management and setup” will lend itself to a more unified effort moving forward, and Diaz makes the decision that is best for him, and him alone.

It’s the least this man deserves for what he’s given to the sport.