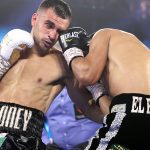 The Australian boxer-puncher will take on Franco for the third time in 14 months when they meet at Hard Rock Hotel & Casino, in Tulsa, Oklahoma, on Saturday (ESPN/ESPN+, 8 pm ET, 5 pm PT).

The Ring’s No.8-rated junior bantamweight was floored and subsequently defeated via 12-round unanimous decision in their epic first encounter in Las Vegas in June of last year.

However their November rematch was declared a highly-controversial no-contest after two rounds when referee Russell Mora ruled that an accidental headbutt caused Franco’s right eye to swell shut. Instant replay appeared to show Moloney landing a series of stiff jabs but, following a 30-minute review, the Nevada State Athletic Commission ruled a headbutt caused the damage.

Following the disappointing outcome, Franco has continued to double down on the headbutt claim.

“Yeah, for sure [the damage was caused by] a headbutt,” he told The Ring. “There’s no doubt about that. And after the headbutt, my right eye just continued to get worse from all the hits I was taking; I couldn’t see out of it.”

The 30-year-old Moloney (21-1, 14 knockouts) is not only unfazed by Franco’s comments; they were also expected.

“It [motivates me],” he said with a smile. “I didn’t expect that he’d come out and say, ‘Oh, you know what? It was a punch,’ but I have seen interviews where he’s trying to claim that, ‘The fight was going the same way as the first fight. When [Moloney] started strong, it was a head clash; I was going to stop him later in the fight anyway.’

“He knows [that wasn’t] true. There’s a complete difference between the first fight and the second fight on my part. And he could feel what I was bringing to the ring that night. And I know that, deep down, he knows that I’m more of a challenge than he thought going into that second fight.”

Franco (17-1-2, 8 KOs), 25, of San Antonio, ranked No. 6 at 115 pounds by The Ring, revealed that he entered training camp for the rematch overweight, which he later admitted was “a terrible mistake.”

“I came into training camp really heavy. Because of that, I ended up having trouble making the weight but, this time, I came back lighter. I disciplined myself and I’m looking to look sharper and stronger in the ring and to put this trilogy to rest.”

For Franco, it was a matter of excessive celebration and getting too comfortable.

“That’s exactly what happened,” Franco revealed. “I was eating too much and enjoying myself too much. I got off track for a bit but now I’m right back where I need to be. I’m focused; my head is on right and I’m ready to go. “It’s more of a self-discipline type of thing. At the end of the day, I’m my own person; I’m my own man, so I have to make my own decisions. It’s all about self-discipline.”

And Moloney believes not only was that the case but that Franco was anticipating the rematch to be easy. Franco discovered rather quickly that he was dealing with an entirely different animal.

“I believe he was overlooking me going into that second fight and just thought he was going to walk right through me and he got a shock that night when he saw what I bring to the table.”

You may have missed:

SETTLING THE SCORE: JOSHUA FRANCO VS. ANDREW MOLONEY ON AUGUST 14

ANDREW MOLONEY LOOKS TO RIGHT A WRONG VERSUS JOSHUA FRANCO

THE MOLONEY TWINS VOW TO BOUNCE BACK FROM RECENT SETBACKS, REVENGE AND WORLD TITLES SOUGHT

The post Andrew Moloney: Joshua Franco was overlooking me going into our rematch appeared first on The Ring.