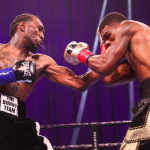 Robert Easter looks like he belongs at 140 pounds, judging by his showing against Ryan Martin on Saturday night at Mohegan Sun, in Connecticut.

Easter snapped a crisp jab from the start, and his ring generalship was on another level from Martin in the Showtime TV opener on an event topped by Adrien Broner. There were no knockdowns, but Easter dominated the scrap, which went the distance. After 12, the scores were 117-111, 118-110, 118-110, for Easter, and he’ll soon be sniffing at a title crack in this weight class if he keeps on performing in this way.

Easter hadn’t gloved up since he beat Adrian Granados in October 2019, his first try at the junior welter class. Would there be rust on this Premier Boxing Champions production? Martin came in still stung by the blowback he received from not making the most of a step-up fight opportunity, against Josh Taylor in Nov. 2018. Martin was not living up to his nickname, “Blue Chip,” on that night, when he succumbed to Taylor in round seven. Adding insult to injury, he got spanked for testing PED positive after the bout. Easter was on paper a significant step up, again, after Martin got on a winning track with Ws over two journeyman in 2020.

Easter (from Toledo, Ohio; age 30) beat Martin (139.5 pounds; from Akron, Ohio; lives in Chattanooga, Tennessee; age 27) in the amateur ranks about nine years ago, for the record.

Both men would want to get into the RING top ten at 140 and Easter will now be knocking at the door, where Taylor is RING champ, and Jose Ramirez is ranked No. 1.

Easter wanted to get back on the ascent. He drew in a horrid bore-fest against Rances Barthelemy in 2019 after dropping his IBF lightweight title to Mikey Garcia in 2018. He’d snagged the strap in a win over Richard Commey in 2016–Martin served as a sparring partner for that camp–and did three defenses before falling to Garcia.

The jab looked sharp and strong right from the get go in round one for Easter. The Martin corner told their guy in the first and the second to be busy, not just wait for the perfect opening. The scene was more to the liking of the Martin corner, led by trainer, Mark Farrait in the third. He closed the distance and did some inside work, clanging to Easters’ body. Ferrait looked to light a fire under Martin after the third, telling him words are cheap, and that he needed to work harder.

To start the fourth, Easter looked smooth in putting together combos. The long and hard jab, paired with a left hook to the body follow made Martin hesitate. The ex IBF champ looked calm and in control, slowly edging mostly to his left, ripping the jab, keeping a space between him and Martin. They traded opportunities in center ring in the fourth. Easter split the guard of Martin with the jab once, twice, and sometimes a third time, and Martin wasn’t showing that he had a strong sense of how to interrupt his flow. Ryan Martin heard it from his trainer during the fight with Easter. “This is bullshit, you worked too hard for this,” Mark Farrait told the loser.

To round six–Easter kept on being the boss.

“Ryan, you gotta get back in range, kid,” yelled Farrait from the apron.

Trainer Robert Easter Sr. gave his son attaboys as he kept up the high velocity jab and added hooks for effect. Farrait said, “You ain’t doin’ nothing …You’re losing the fight, you’re not doing anything,” Farrait said after the seventh. No feints, nothing they’d worked on was being utilized, the trainer said.

In the eighth, Martin, who was trained for a spell by Abel Sanchez,  responded to begin the round. He acted more aggressive, got in Easters’ face, but “E-Bunny” didn’t look flustered. This was Martin’s best round, would he keep up the momentum?

We saw a cut on Easters’ left brow, but it didn’t look bad. (A replay showed that an accidental clash caused the slice.) In the ninth, Easter moved more, didn’t let Martin get close as often. Then he’d fire, and slide, and stay out of harm’s way. “Keep boxing from the outside,” Papa Easter told the kid after the round.

In the tenth, Easter stayed focused with his spacing. He kept space in between him and Martin, who would come forward, but not in a particularly imaginative or super aggressive way. In the 11th, Martin didn’t show that he’d found in between rounds the recipe to change the vibe. In round 12, Martin had no answer, still, and they’d go to the cards.

Easter told the camera it was “easy work” after the final bell clanged. It looked that way, outside looking in.

Post-fight, the fighters had this to say:

Robert Easter: “I was just comfortable. Once I stay boxing, I get comfortable. I get a little bored but everybody says when I box, when I use my jab, keep my distance, I make the fight that much easier. So that’s what I was working on the whole camp. Me and my dad have been stressing on use the jab, keep your distance and that’s what we did. I wanted to fight but as you see, when I wanted to fight, I got headbutted. So it was best to keep our distance.

“Everybody knows when I get in the ring, I want to fight. That’s just where I feel a lot of adrenaline, a lot of  action, but like I said, when I box I make it look easy. I can count on how many fingers on when I actually just stayed boxing instead brawling.

“Whoever has those straps, whoever is in the way is going to feel this wrath. Me and AB, we’re coming to stir up the 140-pound division and that’s that. There ain’t no particular fighter, I want them all. We’re coming for all those straps.”

Ryan Martin:“It was a great fight. I thought I was competitive but obviously I could have done a lot of things better. I followed him too much and he was able to take away our game plan. He did a great job of keeping me on the outside. There’s not too much to say, he was the better man tonight. His jab didn’t bother me too much but it did keep me from getting on the inside. He never stunned me or affected me with it, but I should have sped up on him a little more.”

Bellator free fight: Yaroslav Amosov continues unbeaten streak at Bellator 252
Yesterday 13:50MMAjunkie.com
Boxing: Vijender Singh’s Next Pro Bout Will be Held on Rooftop Deck of Casino Ship in Goa
Yesterday 11:55India.com
Dillian Whyte: 'I was born in a storm. Adversity is the story of my life'
Yesterday 13:30The Guardian (Boxing)