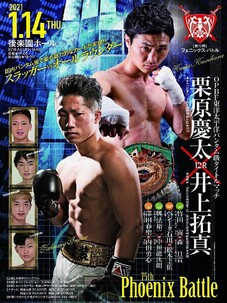 On January 14th we'll see the return to the ring of Takuma Inoue (13-1, 3) [井上拓真], who hasn't fought since a 2019 loss to Nordine Oubaali in a WBC Bantamweight world title bout. The once beaten Inoue, the younger brother of Naoya Inoue, won't be returning to the ring with an easy confidence builder but will instead be facing off with OPBF Bantamweight champion Keita Kurihara (15-5, 13) [栗原慶太], in a what will be a clash between two world ranked Japanese Bantamweights.

Interestingly a number of international betting websites have priced the bout up for those who are able to bet internationally, and have made Inoue a very, very clear favourite here.

The 25 year old from the Ohashi Gym is priced at 1.15 to take home the victory, bounce back from his sole loss and take home the OPBF title.

Kurihara, who has been in great form since a 2017 TKO loss to Super Bantamweight Hiroaki Teshigawara and has won 6 in a row, has been priced at 5.95 to take home the win and retain his title, making what would be his second defense.

The draw also been priced up by some bookies at 23.00.

​Sadly, at the time of writing, it's only the to win market that's available and the odds are only available at very select international bookmakers, but we thought the odds were worth sharing, as always, to try a get a feel of how people are seeing the bout.

Interestingly, at the time of writing, Boxmob.jp have a poll which has the bout looking much more even. Kurihara is expected to win with 41% of the vote and Inoue with 60% of the vote*.

The break down from that is that 34% of those polled favoured a Kurihara win by T/KO, with 7% going with Kurihara by decision, 34% going with an Inoue decision and 26% going with a stoppage for Inoue. The draw hasn't had a single selection from the 148 people who have been polled.

*Note margin of error due to rounding.