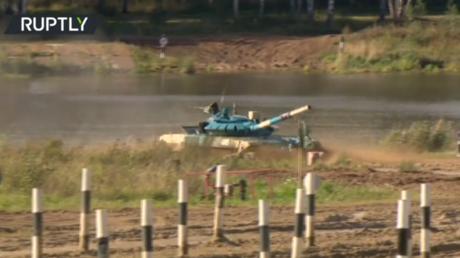 The Russian team has once again been crowned world champions of Tank Biathlon, after defeating Kazakhstan, China, and Azerbaijan in the final round of the 2021 competition at the 7th International Army Games, held near Moscow.

The competition, which started on August 22 and finished on Saturday, saw 19 countries from around the world take part, including Kyrgyzstan, Laos, Tajikistan, Myanmar, and Qatar. 18 of the teams had participated before, with Mali being the only debutants.

Tank biathlon is a sport based on the winter biathlon, where skiers must race through a cross-country trail and shoot rifles at targets. In tanks, crews must complete laps of an obstacle course and fire at targets from the armored vehicles while on the move. Invented by the Russian military, tank operators shoot manually, without any modern fire-control systems.

In the final round, the squads had to complete four laps of an obstacle course, firing a tank gun, a twin gun, and an anti-aircraft machine gun. Russia won with a time of one hour and 36 minutes, coming ahead of silver medalists China. Kazakhstan took the bronze.

The tank biathlon world championship is held every year as part of the International Army Games at Alabino, a huge shooting range used by the Russian armed forces to simulate combat operations.

The Russian team has won every year since the competition’s inception in 2013. In 2019, the world championships were expanded and split into two divisions. This year's second division was won by Kyrgyzstan, ahead of Tajikistan and Myanmar.

Dancesport
08 Oct 2021 13:55TheSun.co.uk
Inside the ‘all inclusive’ $7.5M mansion with its own SHOPPING MALL, restaurant, wine shop, and ballroom
Curling
05 Oct 2021 10:39Irish Curling Association
ICA Opening Bonspiel and Training Day
Boxing
Yesterday 18:29TheSun.co.uk
Errol Spence Jr returns to gym after eye surgery but Terence Crawford questions if rival will ‘ever be the same fighter’
Chess
16 Oct 2021 13:30PocketChess 2.0 vs. Chess Genius 1.2
Nomad Base Station Mini review – a wireless charger with the luxury of leather