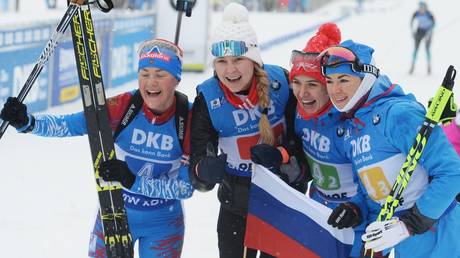 Representatives of the Russian biathlon squad, including athletes and coaches, have been prohibited from using national symbols while competing at the world championships in Pokljuka, Slovenia.

The rule, imposed by the International Biathlon Union (IBU), covers not only the team’s uniform and equipment, but also social media posts, banning athletes from sharing national emblems online.

In December the World Anti-Doping Agency’s (WADA) sanctions came into force, barring Russia from major international competitions as well as hosting or bidding for big sporting events during a two-year period.

Russian team members performing at the Olympics and world championships should compete as neutrals without national flag and anthem.

In Pokljuka the Russians will be presented as the Russian Biathlon Union team, and they will have a neutral outfit with no reference to their national affiliation.

The athletes could face the prospect of being penalized If found violating restrictions regarding the national symbols.

The global championship is scheduled to run from February 10 to 21, with more than 300 top-class competitors from 38 countries taking part in the event.

The competition will be held without spectators, in accordance with Covid-19 protocols implemented by the IBU.

“The world has changed significantly since we last hosted our World Championships and naturally we have had to adapt our premier event to reflect that. But what has remained the same is the dedication of our athletes and our desire to provide the very best environment for them to compete,” IBU President Olle Dahlin said.