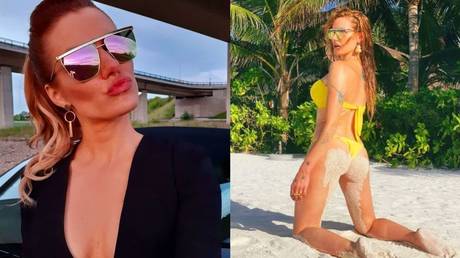 Czech biathlon queen Gabriela Koukalova has taken part in a revealing Playboy photoshoot, accepting the offer to pose for the men’s magazine after being confirmed that a major part of the proceeds will go to charity.

The two-time world champion said that her photos are aimed at supporting people with eating disorders, adding that she has personally battled the illness, which seriously impacts physical and mental health.

“The offer to take part in a such a steamy photo session stunned me. But the charity factor made me agree. My photos will not be just seen by readers, they will also support people with eating disorders. I have personal experience of battling the diseases. We want to collect 250,000 Czech koruna ($11.500) for my fund,” Koukalova said.

“I am a woman and I love to be beautiful. I love to dress up, but real beauty hides underneath clothes. It’s of great importance to accept your physical beauty and love yourself,” she explained.

Koukalova is one of the most decorated Czech athletes, who managed to claim the prestigious Big Crystal Globe trophy in 2016. She also possesses two world titles, won in the mixed relay in 2015 and in the women’s sprint in 2017.

The renowned biathlete skipped the 2018 Winter Games due to health problems and, a year later, announced her retirement from professional sport.