LEWIS HAMILTON and Max Verstappen mocked Ferrari for their bizarre tactics after the Scuderia endured another dismal race in Budapest.

They couldn't believe their luck

But as the race wore on, Leclerc was told to pit and his team made the strange decision to put the hard tyre on his car.

Verstappen then breezed past the Monegasque driver as Leclerc struggled for grip – with the Ferrari man eventually finishing down in sixth.

And prior to the podium presentation, the three of them had a chuckle at Ferrari’s expense as they tried to get their heads around the failed strategy. 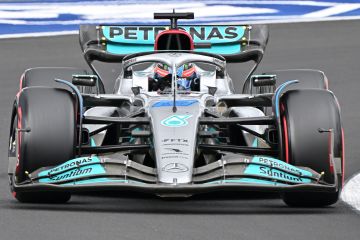 Speaking in the video, a confused Hamilton asks: “Ferrari were on the hards?”

Verstappen and George Russell then looked at each other and laughed, before the reigning world champion replied: “Yeah!”

Hamilton, Verstappen and Russell weren’t the only drivers baffled by the decision to use the hard tyre.

And Leclerc himself came out after the race to question his team’s bizarre tactics.

He said: “I felt very strong and very comfortable on the mediums.

“I wanted to stay out and I don’t know why I was called in. I was confused by that.

“Everybody will remember the last part of the race where it was a disaster for me, especially the hard [tyres] – that’s why I lost the race, basically.”

Ferrari’s in-race tactics have repeatedly cost them points so far this season.

And the Scuderia are now drifting out of contention in both championships.

Verstappen leads Leclerc by a mammoth 80 points in the drivers standings heading into the four-week summer break.

And Red Bull also boast a 97-point advantage over Ferrari in the constructors championship.