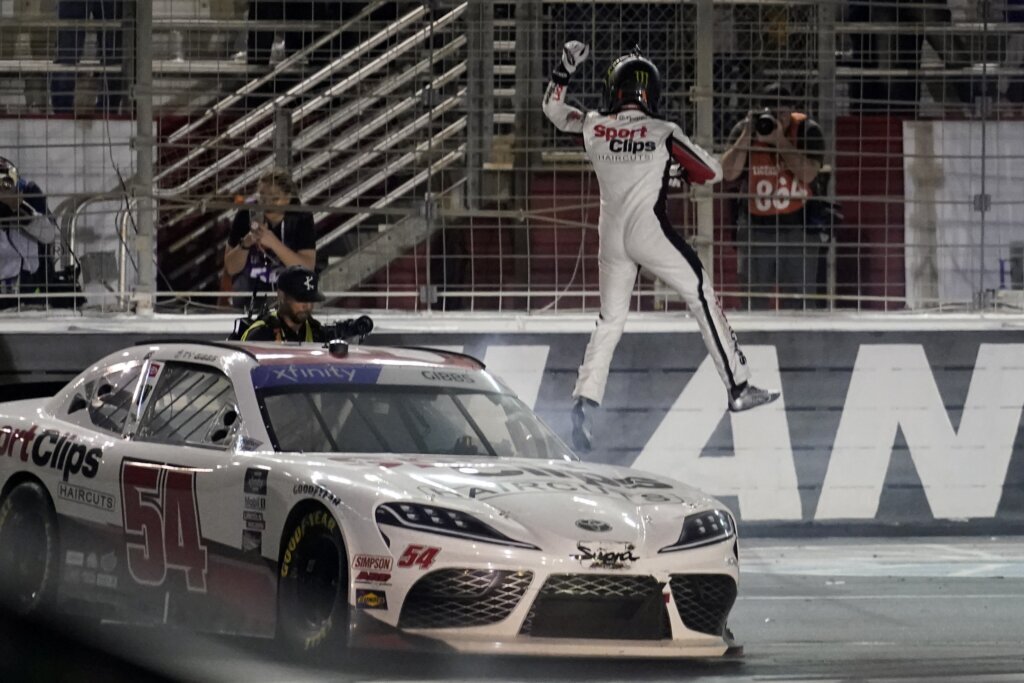 CHARLOTTE, N.C. (AP) — William Byron began his fifth season at NASCAR’s top level in a contract year with the best team in the sport.

Rick Hendrick likes to extend his drivers as early as possible, so it can’t be any fun for Byron to be in limbo. He has a high-profile seat as the driver of Jeff Gordon’s old No. 24 Chevrolet, and his teammates Chase Elliott and Kyle Larson have won the last two Cup Series titles.

His precarious position aside, Byron hasn’t stressed about his job security.

“Mr. H and I have had great conversations and he told me not to worry about it,” Byron told The Associated Press. ”It’s just a formality, that’s what he said. So I feel good about it and am just excited to keep racing and trying to win.”

And that he did. Byron pulled out a white-knuckler of a victory at revamped Atlanta Motor Speedway by holding off a train of challengers Sunday in conditions similar to the late-race hysterics typically found at Daytona or Talladega.

The modifications made to Atlanta created pack racing, which is when luck is as important as skill. The leader is the sitting duck and forced to mirror race, trying to anticipate the defensive moves needed to win the race.

Byron withstood each challenge over 10 intense laps to win for the first time this season and third time of his career. Larson, Alex Bowman and Byron have combined to give Hendrick three wins in the last four races. Hendrick clearly has the top team out of the gate, so the boss was very pleased with Byron at Atlanta.

“He was pretty pumped after Sunday,” Byron said.

Byron, who is 24, has been part of the Hendrick group since 2017 when he drove for JR Motorsports and won the championship in his lone season in the Xfinity Series. The Charlotte native got his start the year prior, as an 18-year-old driving a truck for Kyle Busch.

“We talk probably now more than ever,” Byron said of Hendrick. “When I was younger, he just wanted me to have the freedom to learn. He told me that when I first got in the Cup Series, it was going to be a lot of learning.

“And I feel we bond a lot more. Especially with Jeff. I feel like I can go to Jeff and ask him a lot of things about the car and racing in general. It’s nice to have more communication, more than when I started.”

The Atlanta victory was just the third of Byron’s career. He won the regular-season finale in 2020 for a dramatic grasp of the final spot in the playoff field, and he won early in 2021, at Homestead in the third race of the season. He finished a career-best 10th in the championship standings last year.

Next up is the first road course for the new Next Gen racecar as NASCAR runs Sunday at the Circuit of the Americas in Austin, Texas. Elliott was the winner in last year’s inaugural race, where it was called 14 laps early because of torrential rain at the permanent road course. Byron was 11th when the race ended.

He said the communication between the four Hendrick teams has been strong and an important part of the team’s fast start with the new car.

“I feel like we’ve won races with our ability to adapt together,” Byron said. “We have great communication between the four of us. If one of us unloads with a fast car, everyone can migrate to that. Practice is going to be hectic at COTA. Our goal is to just get some clean laps and get an idea of what we need to qualify. Then I hope we see another great race.”