(Stafford Springs, CT)—Stafford Speedway hosted Weekly Racing action on Friday, September 24 with all 5 of its divisions in feature action.  The SK Modified® feature saw an absolutely thrilling finish with Stephen Kopcik making a last lap, last corner pass of both Todd Owen and Keith Rocco to take down his fourth consecutive victory.  Al Saunders was a first time 2021 winner in the Late Model feature, Brian Sullivan took down his fourth win of 2021 in the SK Light feature, Alexandra Fearn came home a winner for the 7th time in the Limited Late Model feature, and Bert Ouellette was a career first time winner in the Street Stock feature.

In the 40-lap SK Modified® feature, Noah Korner took the lead at the drop of the green flag with Jon Puleo right behind him in second.  Marcello Rufrano was third in line followed by Keith Rocco and a side by side duel between David Arute and Matt Vassar for fifth.  Puleo powered his way by Korner on lap-7 to move into the lead with Rocco getting around Rufrano for third.  Arute took fifth from Vassar, but Todd Owen was now in fifth with Arute in sixth as the field completed lap-9.

Rocco took second from Korner on lap-10 and he went by Puleo on lap-11 to take over the lead.  Behind Rocco, Puleo, and Korner, Owen took fourth from Rufrano on lap-12.  Lap-16 saw Owen take third from Korner while Arute took fifth from Rufrano.  At the halfway point of the race, Rocco held the lead with Puleo, Owen, Korner, and Arute making up the top-5.  Sixth through tenth was Michael Christopher, Jr., Stephen Kopcik, Cory DiMatteo, Rufrano, and Dan Wesson.  Kopick made a move to get by Christopher on lap-23 to move into sixth while Arute nearly took fourth from Korner on lap-24 but Korner was able to fend off the challenge.

Arute came back and was able to make the pass on Korner on lap-27 to move into fourth and Kopcik followed him by to take fifth and drop Korner back to sixth as Rocco continued to lead Puleo and Owen at the front.  Anthony Flannery brought the caution out with 37 laps complete with a spin on the backstretch to set up a 3 lap sprint to the finish.

Rocco took the lead back under green with Owen moving into second and Kopcik third.  Owen charged his way into the lead on lap-38 and Kopcik nearly took second, but the caution flew with 39 laps complete for a spin in turn 1 by Vassar to set up a green white checkered finish.

A multicar incident at the rear of the field brought the caution right back out on the restart.  On the next restart, Owen and Rocco went wheel to wheel for the lead.  They took the white flag still side by side but Owen got clear in turns 1+2.  Going into turn 3, Rocco made a move to the inside of Owen and briefly took the lead but he drifted up the track, allowing Kopcik enough room to pass both Owen and Rocco in the final corner and take down his fourth consecutive victory in thrilling fashion.  Owen finished second with Puleo, Rocco, and Arute rounding out the top-5. 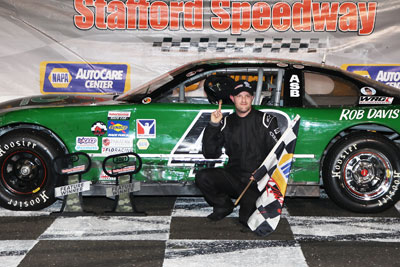 In the 30-lap Late Model feature, Paul Arute backed his car into the turn 1 wall after contact from Tyler Leary to bring the caution out before a lap could be completed.  Leary was sent to the rear of the field by Stafford officials for the contact with Arute.

Al Saunders took the early lead on the restart with Zack Robinson in second.  Tom Fearn went by Robinson on lap-2 to move into second with Andrew Molleur in fourth and Michael Bennett already up to fifth.  Bennett quickly went by Robinson and Molleur to move into third while Wayne Coury, Jr. was on the move, taking fourth and dropping Molleur back to fifth as Robinson slid all the way back to eighth place.

With 10 laps complete, Al Saunders was still in command of the race with Fearn, Bennett, Coury, and Molleur behind him.  Adam Gray was sixth with Michael Wray, Robinson, Paul Varricchio, Jr., and Kevin Gambacorta rounding out the top-10.  The order remained the same until lap-20 when Gray went by Molleur to take fifth and Wray followed him by to take sixth.  Molleur then came to pit road where his crew went under the hood of his car.

Bennett was all over Fearn for second place, but Fearn was able to hold him off and maintain the position.  Saunders led the field to the checkered flag to pick up his first win of the 2021 season.  Fearn held off Bennett for second with Coury and Gambacorta rounding out the top-5. 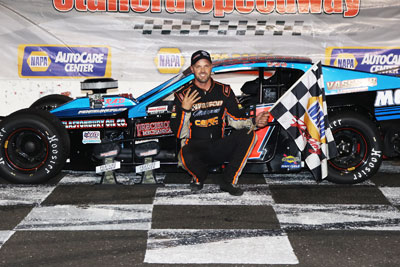 In the 20-lap SK Light feature, Meghan Fuller took the lead at the green flag and she led the first 3 laps before Peter Bennett powered his way into the lead.  Mark Bakaj followed Bennett by Fuller to move into second.  Amanda West spun coming out of turn 2 to bring the caution out with 4 laps complete and just after the caution was displayed for West, the car of Glenn Bartkowski ended up on its roof on the backstretch, which brought the red flag out immediately.

Bennett and Bakaj went side by side for the lead on the restart with Bakaj taking the lead at the line by a nose.  Bakaj got clear into the lead on lap-6 with Norm Sears taking third behind Bennett.  Alexander Pearl went by Bob Charland on lap-8 to move into fourth place.  Pearl took to the outside lane and he took third from Sears on lap-10.  Brian Sullivan and George Bessette, Jr. both followed Sullivan around Sears to move into fourth and fifth and drop Sears back to sixth as Bakaj continued to lead Bennett.

Sullivan was starting to apply heavy pressure to Bennett for second and he was able to make a pass on lap-16.  Bennett was able to get into line in third with Pearl and Bessette behind him.  Sullivan took a look to the inside of Bakaj on lap-18 in turn 4 but Bakaj was able to maintain the lead.  Sullivan made the pass for the lead on lap-19 as the leaders raced into turn 1 and he led the field to the checkered flag to pick up his fourth win of the 2021 season.  Bakaj came home in second with Bennett, Bessette, and Pearl rounding out the top-5. 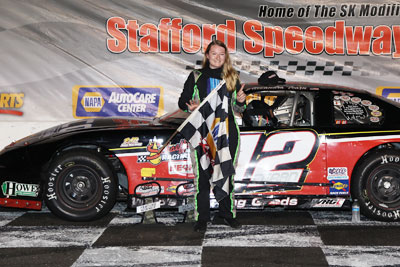 In the 20-lap Limited Late Model feature, R.J. Surdell took the lead with Ari Jencik and Matt Clement racing side by side for second.  Clement took second and he and Surdell touched with Surdell spinning through the backstretch grass to bring the caution flag out with 4 laps complete.

On the restart, Gary Patnode got sideways in the middle of turns 3+4 after contact from Matt Scappini and collected the car of Mike Hopkins to bring the caution back out before a lap could be completed.  Scappini was sent to the rear of the field for the contact with Patnode by Stafford officials.

The restart saw Alexandra Fearn go 3-wide with Clement and Jeremy Lavoie for the lead with Fearn and Lavoie emerging side by side for the lead with Devon Jencik taking third as Clement slid back to fourth.  Dave Shinder got out of shape on the backstretch but was able to get his car moving and the race stayed green.  Fearn was now in the lead with 7 laps complete with Devon Jencik taking second from Lavoie.  Ari Jencik was fourth in line followed by Rich Hammann in fifth as Matt Clement fell back to sixth place.  Clement spun coming out of turn 2 to bring the caution flag back out with 11 laps complete.

Devon Jencik took the lead on the restart with Fearn slotting into second.  Lavoie was third in line followed by Hammann and Ari Jencik.  Fearn was applying heavy pressure to Jencik for the lead but Jencik was able to hold him off.  Fearn was able to make a move on lap-17 to get alongside Jencik and she took the lead from Jencik on lap-18.  Lavoie was still third with Hammann in fourth and Ari Jencik in fifth.

Fearn took the checkered flag to pick up her seventh overall and second consecutive feature win of the 2021 season.  Devon Jencik finished second with Lavoie, Hammann, and Ari Jencik rounding out the top-5. 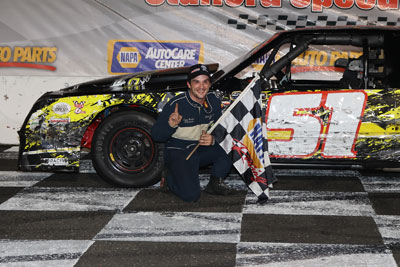 In the 20-lap Street Stock feature, Bert Ouellette streaked into the lead on the first lap, taking to the outside lane to get by polesitter Daltin McCarthy.  Travis Downey came up to second with McCarthy third and Tyler Trott in fourth before the caution flew with 1 lap complete for Rob Sears, whose car came to a stop in the middle of turns 1+2.

Ouellette took the lead on the restart with Downey right on his rear bumper in second.  Trott moved up to third with Adrien Paradis, III moving up to fourth and Travis Hydar taking fifth.  Just behind Hydar was the Street Stock championship duo of Frank L’Etoile, Jr. and Chris Meyer with Nickolas Hovey in eighth, McCarthy slid back to ninth and Bobby Stirk, III rounded out the top-10.

Paradis took third from Trott on lap-9 while L’Etoile took fifth from Hydar.  Meyer followed in L’Etoile’s tire tracks and he went by Hydar on lap-10 to move into sixth place and drop Hydar back to seventh while Ouellette continued to hold the lead with Downey and Paradis still giving chase.  L’Etoile continued his march to the front by taking fourth from Trott on lap-12 and he brought Meyer and Hydar with him to drop Trott from fourth back to seventh place.

Ouellette led the field to the checkered flag to pick up his first career Street Stock win at Stafford.  Paradis finished second with Downey, L’Etoile, and Hydar rounding out the top-5.

For more information contact the Stafford Motor Speedway track office at (860) 684-2783, or visit us on the web at www.staffordspeedway.com.

Larson wins at Texas for 1st spot in NASCAR's championship 4
Yesterday 23:21The Toledo Blade
Is there a Let’s go Brandon flag?
Yesterday 17:27TheSun.co.uk
NASCAR driver is thankfully OK after he crashed, and his car burst into flames at Texas
Yesterday 22:01For The Win (usatoday.com)