RUNNERS rejoice as they finally return to the capital for another bumper London Marathon – and Sir Mo Farah will be making an appearance.

Both amateur and elite runners will take to the streets of London raising millions for charity along every step of the gruelling 26.2 mile course.

The 26.2 mile route starts near Blackheath in Greenwich, passing landmarks such as the Cutty Sark, the Shard, Tower Bridge, and the London Eye.

This year race organisers received more than a quarter of a million applicants, for those that weren’t successful there is a small window to sign up to the virtual London Marathon. 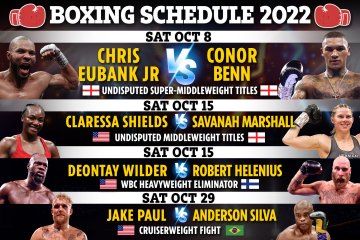 PUNCH IT IN YOUR DIARY

What TV channel is the London Marathon on and can I live stream it?

How many people are running in the London Marathon and what familiar faces will take part?

There will be a confirmed number of 80,000 participants running at this year’s London Marathon.

And the contestants include amateur’s, musician’s, TV personalities and elite runners.

Most read in Athletics

How can I enter the London Marathon 2022 and is the ballot closed?