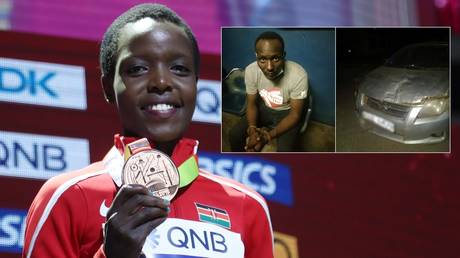 The husband of Kenyan Olympic distance runner Agnes Tirop has been arrested after apparently trying to make a desperate escape from police after the athletics star was found stabbed to death earlier this week.

Ibrahim Rotich – named in some reports as Emmanuel – was detained in the city of Mombasa on the western coast and will face charges once police complete their investigations, according to officials.

Police had pleaded with Rotich to surrender after Tirop was found dead with stab wounds on Wednesday at her home in the city of Iten, which is a popular training center for athletes.

The runner, 25, had finished fourth in the 5,000m at this year’s Tokyo Olympics and had two World Championship bronze medals to her name.

Just last month, Tirop smashed the world record for a women-only 10km race at an event in Germany, wiping 28 seconds from the previous record.

“The suspect has been arrested today and is in custody at Changamwe police station in Coast Region,” Tom Makori, sub-county police commander for Keiyo North, told Reuters on Thursday.

“I can confirm now we have [our] main suspect in our custody.”

According to a series of tweets from Kenya’s Directorate of Criminal Investigations, Rotich was arrested after ramming his car into a truck as he apparently tried to flee the country.

The prime suspect in the gruesome murder of 25-year-old world 5,000m record holder Agnes Tirop, has been arrested. Ibrahim Rotich, who was in a relationship with the athlete was arrested moments ago in Changamwe, Mombasa county, as he tried to flee to a neighboring pic.twitter.com/G2OrhlaM8X

country to evade justice. Rotich is believed to have killed the two-time World Athletics championships bronze medallist,by stabbing her before going into hiding. Tirop’s lifeless body was found lying on her bed Wednesday morning in Iten, with visible stab wounds on her abdomen. pic.twitter.com/qTY1Z9QBPW

“The suspect is currently being grilled by detectives at Changamwe police station, for more details into the murder, before being arraigned to answer to murder charges,” one message read.

The Twitter account for Kenya's National Police Service said that Rotich had been arrested with another person, Silas Chilla Chellile, and that "both are helping the police with investigations."

It added that a third person, John Kipkoech Samoe, was "earlier arrested for complicity in the murder and already arraigned in court for custodial sentence."

ARREST MADE
Suspected killer husband of Agnes Tirop, the long distance runner heroine recently murdered at her home, has been arrested.The suspect, one Ibrahim Kipkemoi Rotich,who has been on the run with police on hot trail, was nabbed in Mombasa by diligent police detectives.. https://t.co/hgWNI88IJa pic.twitter.com/frGv54XeFH

As mark of respect, Athletics Kenya suspended all competition for two weeks, while the country’s president, Uhuru Kenyatta, had demanded a prompt investigation into Tirop’s death.

“Athletics has lost one of its brightest young stars in the most tragic circumstances,” World Athletics President Sebastian Coe said in a statement on Wednesday.

"I’m deeply shocked by the tragic death of Agnes Tirop, a young and bright talent. Her performances at the Olympic Games Tokyo 2020 gave hope and inspiration to so many people. My thoughts go to the Kenyan Olympic community and especially to her friends and family." - IOC Pt Bach https://t.co/282Y22nlRr