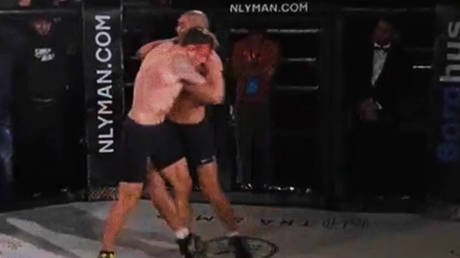 Arguably the most feared current fighter in the UFC, Chechen-born Khamzat Chimaev, was taken the distance by a middleweight in an all-action freestyle wrestling match before being congratulated by a fan who broke into the cage.

Known for his quick turnaround between bouts, the man who won twice in ten days after making his UFC debut in 2020 returned to competitive action less than three weeks after destroying Li Jingliang at UFC 267.

'Borz' faced middleweight Jack Hermansson in Sweden – where he bases his training – at 187lb in the headline bout of Bulldog Fight Night 9 in Gothenburg.

There has been much speculation surrounding which fighters can offer Chimaev a creditable challenge after his last three outings all ended inside a round.

Khamzat Chimaev and Jack Hermansson started before the cage was even cleared haha pic.twitter.com/sxzDiNDDY3

Hermansson, who shares a result on his record with Chimaev in beating Gerald Meerschaert within the opening five minutes, did better than any of the 27-year-old's recent victims.

The Norwegian was still comfortably beaten, though, losing 8-0 on points which were entirely scored by Chimaev during a brutal opening round.

And I guess it's over pic.twitter.com/jCM5dG9Ecy

Chimaev hurled Hermansson to the floor almost immediately and was only two points short of ending the contest through a technical fall.

One fan was sufficiently thrilled by Chimaev's performance to race into the ring and hug his hero.

Chimaev wins on points. I have no idea what I just watched but good job everyone. pic.twitter.com/58DZjLvzoN

Khamzat dominated every second of that and tossed him to his back 3 times….

The winner appeared comfortable at being embraced by the man, who was wearing a black hat and bounced up and down before a security guard removed him.

"Always fun to wrestle with you, my friend," Chimaev told Hermansson afterwards.

Some weird Chimaev fan ran into the cage after the wrestling match ???? pic.twitter.com/5uwFnVSMd6

Wow congrats to hermansson for taking Khamzat the distance. Maybe he was over hyped after all

"It did not go my way tonight," responded the 33-year-old, applauding Chimaev. "Anybody fancy a 20-minute submission-only fight? That's my craft."

Since beating Jingliang, Chimaev has called out a litany of fighters including Leon Edwards, Belal Muhammad, Conor McGregor and Nate Diaz.

There are rumors that Gilbert Burns is on the verge of agreeing a fight with Chimaev, who has even traded insults with rookie boxers and YouTube yobs Jake and Logan Paul.