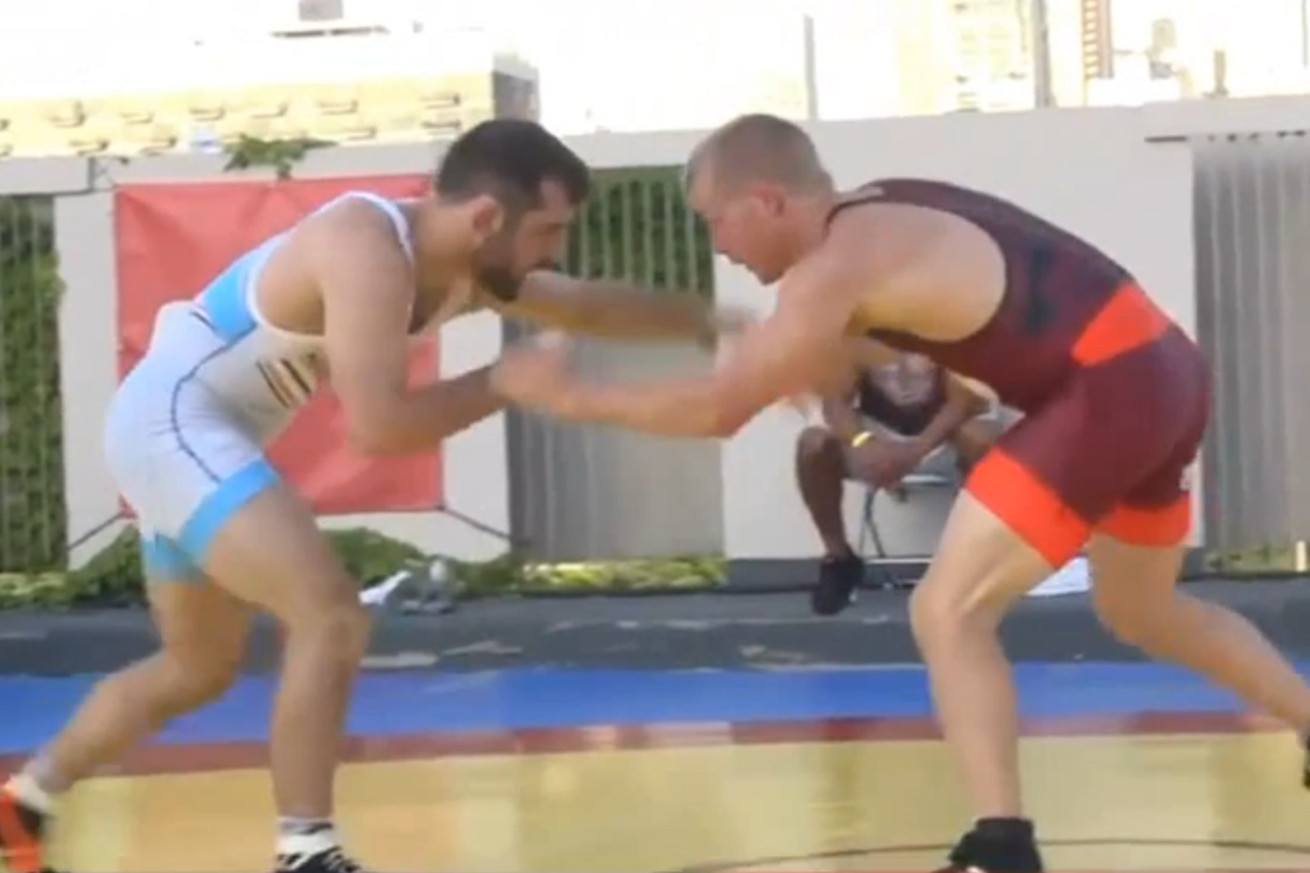 Freestyle wrestling action returned in the United States on June 26th. Beat the Streets Chicago, along with the regional training centers of Minnesota and Illinois, came together to put on Rumble on the Rooftop, an exhibition card literally staged on the roof of a parking garage at an “undisclosed location.”

The main event featured Jordan Oliver and Jason Nolf essentially cancelling out one another’s offense until the final moments, but the co-main event between Illinois’ Zane Richards and Minnesota’s Zach Sanders delivered.

Four-time All-American Zach Sanders has been a staple for the United States at 57 kg, placing at a number of tournaments throughout the years since he graduated from Minnesota in 2012. Internationally his highlights include a silver medal at the 2012 World University Championship and a 2014 Pan-American title. His most recent venture was a run to the bronze match of the 2019 Intercontinental Cup in Dagestan.

Two-time All-American Zane Richards graduated from the University of Illinois in 2017, getting a good feel for international competition fairly quickly. Richards competed in the 2019 Ivan Yarygin Grand Prix and has demonstrated a jump in levels domestically, compared to his college career.

Sanders and Richards split duties for the USA at the 2019 World Cup in Russia.

Adjusting From the Underhook

These days, Zane Richards is a fairly prototypical underhook stylist. He prefers to snap down and dig up to the right side—from there he’ll look for his underhook throw-by or to use it to counter pressure.

For more in-depth commentary on the dynamics of those underhook positions, check out these breakdowns on Hassan Yazdanicharati and David Baev.

Although Zach Sanders was the older man, he couldn’t quite match the bruiser Richards in sheer physicality. A slick operator, Sanders relied on working off the pressure of Richards and countering when Richards pressed even one step too far.

Sanders was able to get to most of his scoring positions by timing the forward pressure of Richards, posting up on the arms and hitting smooth duck-unders. These looks were fantastic, but Richards stuck to his plan and found his positions.

In their first major exchange from underhooks, Richards broke away from the handfight to snap from the left collar tie and quickly dug the right-side underhook. He looked to hit the throw-by, but Sanders clamped down on the whizzer and got his hips back, making sure to create extra distance with the leg Richards hoped to pick.

The way Richards punched the underhook – forward and without flaring his elbow – did more to push Sanders backward than to the left. The idea was to walk Sanders in front of him and pick that near-side leg as it passed.

As Richards settled back into his stance, Sanders struck.

Pulling back with the whizzer, Sanders was able to penetrate deep, getting his head and shoulders underneath the hips of Richards. For a high-crotch counter of this nature, it’s extremely important to elevate quickly and debase the opponent, or otherwise the countering wrestler will end up stuck underneath and broken down.

Sanders popped up as Richards draped across his back. In this case, he was able to pass the legs over as he turned in and covered up for two.

Upon opening the second period, a similar situation ensued. Richards hit the come back up to the underhook off an outside single, and Sanders looked to drop and pull for the high-C.

But this time, Richards was prepared. The two men had begun finger-fighting on the attacking arm of Richards from the original shot attempt, and Richards kept that grip tight as Sanders looked to counter. Richards pinned that hand to the mat, limiting Sanders’ mobility, while kicking back his lead leg.

This quick defense left Sanders on his knees in front of Richards, who shot in to capitalize. Sanders turned and kicked out of the shot, but the initiative from Richards allowed him to follow and cover up in front headlock, eventually leading to a go-behind for two.

Sanders would get another chance at this high-C counter. Immediately feeling the underhook from Richards, Sanders took advantage of the loose grip on the opposite side to take his penetration shot while ripping that right hand free.

Richards was still able to react and kick back that lead leg, but this led to a new opportunity for Sanders. His head was now positioned outside the hips with no grips or limbs to stand in his way, Sanders caught the hips on the opposite side and doubled off to swim through toward the back.

Only just regaining his feet underneath him, Richards’ last recourse was to reach back and grab the head to attempt to prevent Sanders from fully reaching rear standing.

The position was volatile. Sanders could attempt to cheat some sort of arching finish—but without his hips completely behind and underneath Richards, he could end up taking himself feet-to-back. For Richards, there was the possibility of a throw from that headlock position, but he could just as easily put himself on his back.

Richards broke the tension, bailing on the position to only give up two.

With the match tied up, and short time on the clock, the next move was crucial. Sanders looked for the entry that had given him the most success: the duck-under.

From the collar ties, Sanders passed the lead hand of Richards and hit a knee pound to a double leg entry. But Sanders had become predictable, and the outside knee pound entry gave Richards plenty of room to find his underhooks.

Richards hipped back and pancaked him.

Now he could play defense. Without the pressure of Richards to work off of, Sanders struggled to find his way to the legs. Richards was able to control ties and underhook whenever Sanders attempted to change levels. Even step-outs were difficult to find, as Richards could punch the underhooks to manipulate their positioning on the mat.

Ultimately, Richards held on for the win.

This match was an excellent example of the different dynamics a match can feature when one wrestler is relentlessly pursuing a pressure-underhook strategy. When high-level senior freestyle wrestling returns on FloWrestling later this month, hopefully there will be many more interesting tactical matchups to dissect.