Not many people know that Mercy Akide-Udoh, former Super Falcons fearsome striker could have chosen to be an excellent middle and long-distance runner or better still, a table tennis player.

But she chose to play football, where she excelled. Akide-Udoh led the Super Falcons attack in so many battles, spanning over a decade. She took part in multiple African Women’s Cup of Nations, FIFA Women’s World Cups and the Olympics where she represented Nigeria with distinction.

After a glittering career, she delved into coaching, a job she still does to date. Akide-Udoh’s dream is to handle a Nigerian national team someday.

In this first of a two-part interview, the former Nigeria international spoke with SPNAfrica’s Sammy Wejinya on the highs and lows of her career. 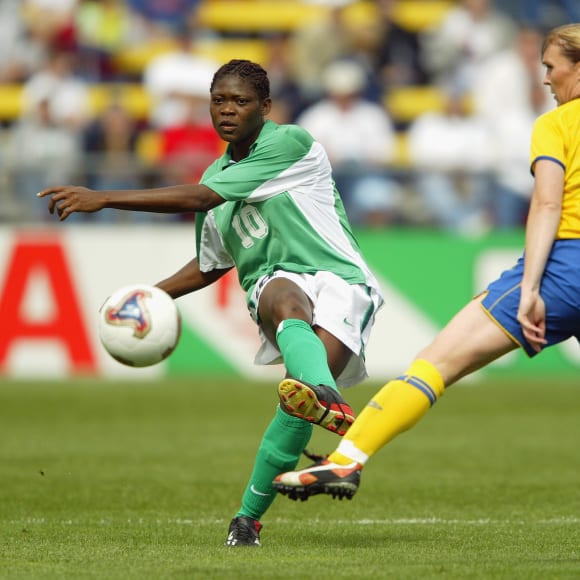 When did you first get into football?

I was five years old when I first got into football. I wouldn’t say I knew what I was doing at the time but I just loved the game.

I had two brothers; Seleipiri and Ipali who were very good at football at the time and I played with them. I was a tomboy and played around with older boys at my neighbourhood; Bundu waterfront.

My Dad worked with the Railway Corporation and we resided at the Railway quarters. There were so many football-loving kids around that area and there were so much street games which helped me hone my football skills at an early age.

You grew up among boys (you have five brothers). How did that influence your future as a football great and what exact roles did Seleipiri and Ipali play in your football education?

They were extremely important to my development, especially Seleipiri who played a great role in directing my path in this regard.

I remember my big break. I was a member of Garden City Queens and our club played a game against Princess Bola Jegede Babes who were on a playing tour in Port Harcourt. I impressed in that game and I was picked to go to Lagos.

My father was out of town at the time so the onus was on Seleipiri, as the eldest in the family to give permission for me to embark on that trip to Lagos. It was tradition and my Mum had to take permission from Sele who was the first Son. They both prayed for me. He did, even though it was hard for him as we played football together.

Sele thought about my future and believes it was best that I left for Lagos at that stage of my career.

You regularly took part in long-distance races, like the 400m, 800m and 1500m. Was there ever a chance that you would have chosen Athletics and not football?

My PE Teacher back then knew I was gifted in all kinds of sport. I could play table tennis, football, athletics and so many others.

I did the 400 metres, 800 metres and my favourite race of them all was the 1500 metres which I loved because I had great endurance. The truth is, I never saw myself pursuing a career in athletics because football was everything to me even at that stage.

I still run but not professionally. Running helped me become the great footballer that I was because that was where my speed comes from.

Many do not know that you were also a regional table tennis champion. Tell us a little bit more about that aspect of your life?

I enjoyed playing ping-pong. We used to get involved in betting through ping-pong. I used to defeat many boys back then and my brother and I would share the money from the betting proceeds (laughs).

However, just like it was with Athletics, I knew football was the main thing for me and that was why I was so happy when I joined Jegede Babes. 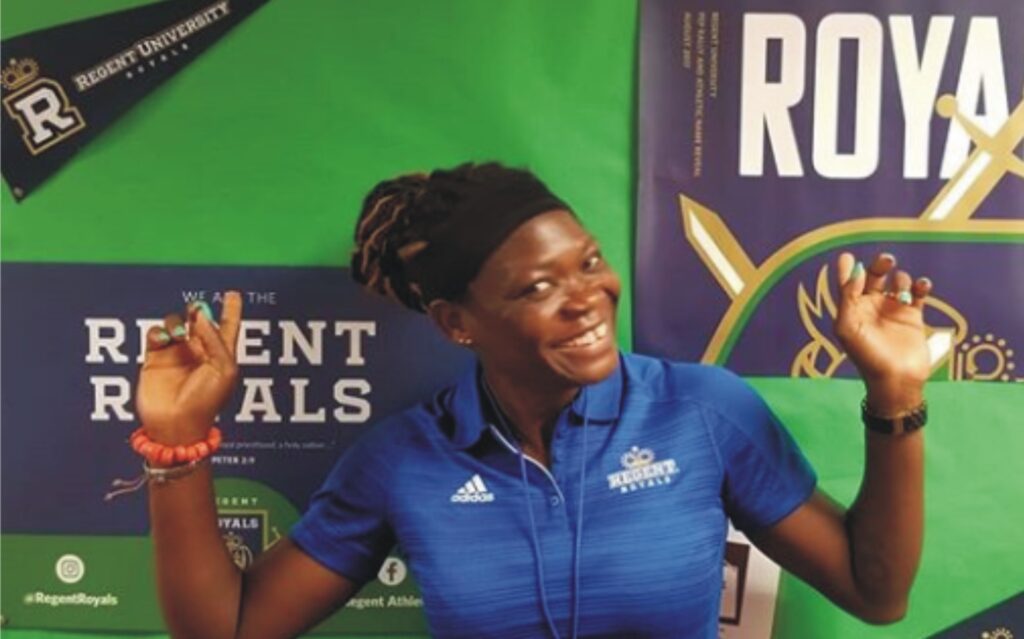 I knew I would receive better training and would get closer to my dream of playing for the National team because I knew I had the talent to succeed at that level.

You will not believe this but I still play ping pong for leisure when I see any table and no one ever beats me!

I am that good….Sammy, I could give you ten ahead and still beat you. Just kidding (laughs again).

Women’s football was not as popular as it is today when you were young. What were the biggest challenges you had to face as a female footballer?

It was not popular but we played the game with passion and that passion still burns to this day. We knew we were creating a path for the young ones and we did that eventually in 1999. Nobody believed we could go as far as we did. We qualified for the first and second Olympics.

I made it to three FIFA Women’s World Cups while some others made it to four.

Social Media then wasn’t what it is today. Back then, we couldn’t just say what we wanted to. We were told what to say and if you went against those orders, you were cut off from the team!

No one wanted to be made an example of such, so we had to embrace those restrictions even though we did not like them.

Those days, journalists would come to interview us but we could not really express ourselves because of the orders we were given.

They called you ske (the skinny one) when you were young. When did you start bulking up as you became such a huge physical presence much later in your career?

(Laughs hysterically) This is a very funny question. Yes, it is true I was quite skinny back then, but I was no pushover!

I was a very good dribbler and it was extremely difficult to foul and bring me down. When I got into the national team, I started bulking up because I started lifting weights.

I started doing special exercises, climbing hills, doing a lot of pushups and slowly, I started bulking up.

So, I was not ‘ske’ anymore. Instead, I became the merciless and marvelous Mercy Akide (laughs again).

Let’s talk about the clubs you represented in Nigeria before you took your skills abroad. You played for clubs like Garden City Queens, Jegede Babes, Ufuoma Babes and Pelican Stars between 1988 and 1999. Please share your highs and lows during your time at those clubs?

I played for my home town club, Garden City Queens and proceeded to Princess Jegede Babes.

When I left Princess Jegede Babes, I joined Ufuoma Babes in Warri, Delta State before joining Pelican Stars in Calabar. However, I did not spend so long at Pelican Stars because I went to the FIFA World Cup in the United States in 1999 and got a scholarship to join Milligan College, Tennessee.

The highs? I enjoyed playing for all these clubs. They took care of me and I never sustained any serious injury.

Lows? There were lots of trips so I was homesick many times. However, the passion I had for what I was doing meant that I was always happy in most cases.

It was during this period that Ismaila Mabo capped you for Nigeria for the very first time. What was the experience like?

First, I want to say that I am very grateful to all the coaches that I worked with. Paul Hamilton was the head coach of the National team and Ismaila Mabo was his assistant.

Mabo saw the passion I exhibited in training and matches and loved it. I was the only new player introduced to the Super Falcons squad of 1995. The level or hard work I always showed was key to my development at that stage.

The coaches saw that I respected the game and encouraged me. The experience of representing Rivers State and Nigeria at the 1995 World Cup was great. I had this feeling that my dream had come true and I gave my all when I played.

You played at the 1995 FIFA Women’s World Cup for the first time as a 19-year-old in Sweden. In Nigeria’s first game, the Super Falcons got smashed 8-0 by Norway and you were hurled off on the stroke of half time by the Nigeria head coach, Paul Hamilton. What was that experience like?

(Laughs) I will never forget that game. The World Cup in Sweden in 1995 was my first. It was overwhelming because when you get to the World Cup, it is no longer girl’s football but women’s football.

I was still a girl at the time and I went to the tournament with an ankle injury. I played only the first half of the first game because my ankle hurt so bad and it was so cold in Sweden at the time.

I had never experienced that kind of cold before and it affected the entire team and the injury I picked up didn’t help.

However, I was happy that I went to Sweden and got experience. There was nothing our coach could do about the results of the matches we played because the teams we faced were simply better than us, especially Norway in the first game.

The teams were better prepared than us. We learned from that experience because the Nigerian Football Federation made better preparations for the 1999 World Cup.

We played lots of friendly matches and went to Germany and the results were evident for all to see at the 1999 World Cup in the United States.

You know the saying; to whom much is given, much is expected.

Nigeria’s next two games included a 3-3 draw against Canada and a 2-3 loss to England but you did not play in any of those games. What was the reason for this?

It was basically because I was injured then. I was dressed and on the bench for that game against Canada and could barely walk.

The Doctor warned that I should not be fielded in that game. For the third game, the coach asked me to warm up and I was poised to come on in the second half but he (coach) eventually changed his mind.

What were the biggest lessons you learned from that tournament?

You are going too deep now (laughs). Taking good care of your body before such a big competition is extremely important.

Also, I don’t think the Nigeria team was mentally prepared for that World Cup. Physically, it was the same thing too. We were no match for the Norwegians who crushed us.

We had no training tour and I still think this happens in women’s football in Nigeria today and hopefully, it will change soon.

Two Nigerian referees, Bola Elizabeth Abidoye and Omoleye Adeyemi Adeola were at that tournament as Referees. Did they offer any advice to the Nigeria team?

No, they did not and that was because they were not in the same city as us. I know Bola very well and I know that if she had met us, she would have given us good advice.

Nigeria was the dominant force in African football and won many AWCs. Why were the Falcons so overwhelmingly dominant at that stage?

This had always been the case even before I started playing for the National team. We were more advanced then because other African countries did not have a women’s football league but we did in Nigeria.

That was the main advantage we had over other African teams but it is different now as the other countries have now started having leagues.

The post Mercy Akide-Udoh: What stood against us at Sweden ’95 World Cup appeared first on Vanguard News.