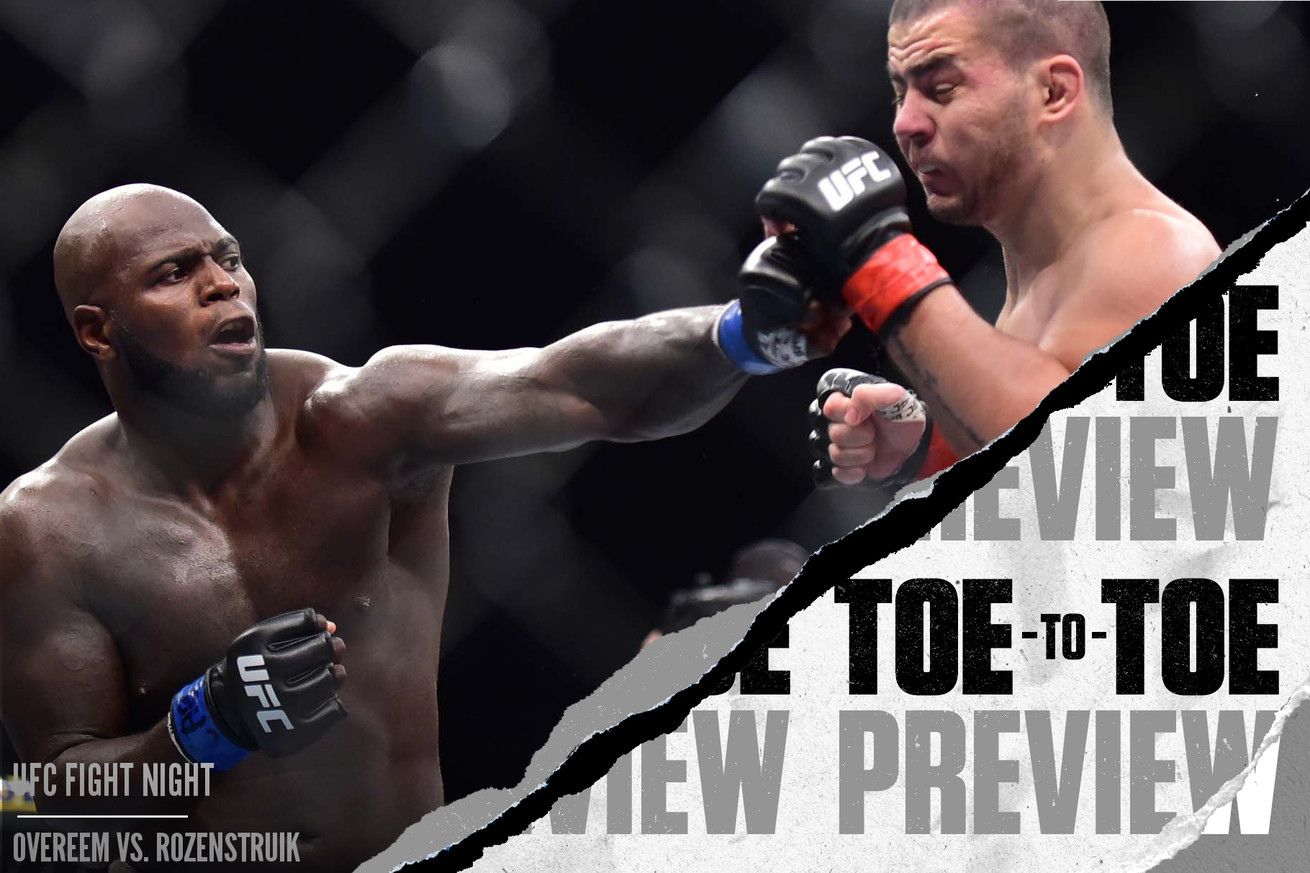 Phil and David breakdown everything you need to know about Alistair Overeem vs. Jairzinho Rozenstruik for UFC on ESPN 7 in D.C. and everything you don’t about table tennis.

Alistair Overeem vs. Jairzinho Rozenstruik headlines UFC on ESPN 7 this December 7, 2019 at the Capital One Arena in Washington, D.C., United States.

Phil: Tom Stoppard references? I’m not even going to try to try to step to that

History / Introduction to the fighters

David: And so it goes. Overeem remains a heavyweight threat in a division that revolves around flesh and chaos. His evolution as a fighter in MMA is more dramatic than a Star Wars mystery. He’s gone from light heavyweight prospect; to light heavyweight also-ran; to K-1 prospect; to K-1 matter eater and horse devourer; to a human Ed-209; to UFC contender; and now UFC gatekeeper. It’s been a roller coaster of performance enhancement and de-hancement. At this point, he’s a guy who won’t win big fights against the most technical heavyweights, but he still has the ability to make opponents like victims in a world star hip hop video.

Phil: Overeem has always made his bread by being someone who doesn’t fit in heavyweight whatsoever. Too much athleticism, too much all-around skill, and far too little durability. It’s one thing to leverage that kind of skillset as Jorge Santiago down at welterweight, and quite another to do it at heavyweight. This has lent itself to a career of impressive highs and brutal lows. Still, Overeem’s sheer diversity of options has always left him an out against pretty much any kind of young prospect who might be sent to test him, with the exception of the true blue chippers like Ngannou and Blaydes. So I guess the question is: is Rozenstruik one of these?

David: The Surinamese prospect with the perfect last name to describe his fighting style might not be a household name — thanks to getting buried on the undercard for one of the bigger fights in recent memory — but he’s about to be. His career up until this point has been as a kickboxer and false accusations of being a mule. I’m not sure his fights thus far are a fair representation of his performance because they’ve been so short. But it’s certainly a fair representation of his potential. Now he’s got a hell of a chance to do more.

Phil: “Heavyweight Adesanya.” That’s essentially the goal for Rozenstruik, someone who got into the UFC at a relatively late stage in his combat sports career, but who has the experience and the technical nuance to potentially be able to back it up. Like Adesanya, he had a somewhat concerning early experience against a mid-level fighter’s grappling. Like Adesanya, he has a good chance to turn that early bad experience around.

David: Overeem’s on a nice run. He’s like heavyweight Cerrone: cycling between winning streaks and losing streaks don’t affect his matchmaking the way it does other fighters because people always flock to the violence. Overeem supplies plenty of that, whether it’s giving or receiving.

Phil: Heavyweight is not a division which moves quickly or has a lot of turnover, and so there’s an opportunity there for a newcomer to leap to the head of the line over a few wins. Does anyone particularly want to watch Stipe-DC 3? They probably do in all honesty. But after that there’s pretty much just Ngannou.

Where do they want it?

David: Not much has changed about Overeem since a lot changed in 2009. For such an elite athlete with a premiere pedigree, his style is still a little awkward. He struts around the ring/cage like a snapping turtle with Glocks underneath his cartilaginous shell. Despite his length, he won’t wing his punches or attack at range. He’ll creep in for punches, but mostly he just wants to knee you to death. He’s more than capable of that. I think a lowkey part of Overeem’s issues over the years are dealing with the whiplash of his body accommodating his style, and vice versa while dealing with the whiplash of his style accommodating different sports. His defense needed time to adjust as he could no longer earmuff through attacks the way he did in K-1, and as he’s gotten bigger, his foot movement was waned, subtly taking away from his ability to grapple (previously one of his strengths in another horsemeat-free life). This is a tough section to write because it’s hard not to repeat myself. Overeem’s strengths are well-documented. His weaknesses are just as well-documented. He hits hard. Especially in the clinch. When he gets hit hard, he’s a lot less intimidating. In that way he’s not unlike Pennywise the clown.

Phil: Like you said, the hymn sheet on Overeem hasn’t changed much over the last... decade or so, but it remains a lengthy and detailed repertoire. He can still strike, wrestle, ground’n’pound and submit, which puts him a solid two skillsets above almost any other heavyweight. The only real difference has been how he leverages that approach. Primarily it’s either the old school approach where he walks the opponent down, punching into the clinch and forcing his physicality, or he fights from the outside with that Jackson-Wink inspired potshotting approach. For this fight, both options present their own level of risk: if he walks in, he risks getting clobbered. If he fights from the outside, he potentially gives a craftier and less shopworn striker the chance to get his timing down. Essentially, he needs to grapple. The main question is how? I suspect that southpaw stance and bodily pushing Rozenstruik to the cage are key.

David: Rozenstruik’s last two fights have lasted a combined 38 seconds. There wasn’t much lolligagging either. Both guys got starched by small, comically efficient strikes that more or less ended each fight. This is Rozenstruik in a pugilism nutshell. If you’re expecting some sort of high-wire act, you’re in the wrong place. His footwork chugs along deliberately, and he’s a patient percussionist. He’s an intuitive counter striker, IMO. His killshots on Arlovski and Crowder were glorified ping pong movements; catching both as they charged in like lunkheads. He’s able to switch stances on occasion, delivering his best punch (his left) from either angle. With chopping, momentous leg kicks, his best move is being able to open up sustained exchanges. If he can charge-in upright, and calibrate each attack, the fight is smooth sailing. His grasp of fundamentals is excellent. He doesn’t overextend his entries, but he doesn’t understate them either. His boxing is the perfect porridge: not too cold, not too hot. The things we haven’t yet seen are the things that threaten the entire edifice of his facepunching prowess; the ground. He’s been tested on the ground, and it’s never looked good. Diaper-wearing Junior Albino and heavyweight prospect Andrey Kovalev had zero issues getting deep on him and putting him on his back. I don’t know if it’s something he needs to work on, or hasn’t had a chance to display, but Rozenstruik showed zero ability to pivot out, defend the wrists, or do much of anything showing even the slightest bit of defensive acumen. Keep in mind, he’s incredibly young to the sport. I’m not offering judgment. Just the observation that thus far, defending takedowns is not one of his talents. Will that factor into the fight?

Phil: Rozenstruik is a relative anomaly for heavyweight in that he’s a powerful lead hand fighter. My Heavy Hands co-host Connor mentioned that he thought Rozenstruik might be a converted southpaw, and that makes a lot of sense to me. He dropped Arlovski with a jab and finished him with a hook, and dusted Crowder off his lead hand as well. Other than that, as you mentioned, it’s mostly good things (footwork, distance management) with the exception of that dismal takedown defense.

Insight from past fights

David: Our colleagues said it best. Along with being movie nerds and foodies, Zane and Connor were on point about how this is that rare fight where the first strike will dictate the narrative of the bout. And for good reason. Overeem just needs one clinch entry, or takedown to take over this bout. It’s been awhile since he’s used his takedowns/grappling, but he’s not the kind of striker to get stuck out in no man’s land either. If Kovalev (regardless of his ceiling; which is hard to gauge) could dictate time in the clinch, Overeem won’t have any trouble. In addition, Overeem is not the kind of guy to leap into shots the way Crowder and Arlovski did. Rozenstruik is pretty small for a heavyweight, which poses some simple obstacles in addition to the stylistic ones.

Phil: I tend to lean towards the Zane side of things, which is that Overeem doesn’t even really need to shoot on Rozenstruik. The Albini fight basically involved the Brazilian locking up the clinch with the kickboxer and walking him to the fence, where he was able to hit techniques like a single leg and, um, a lateral drop. I haven’t seen Junior looking like a D1 wrestler before or since.

David: Heavyweight is always its own x-factor, but for those that forgot the absolutely horrific story: Overeem’s original opponent was Walt Harris. Then this happened.

David: Rozenstruik is so tempting to pick. He has all the right ingredients to take out Overeem. ALL of Overeem’s UFC losses are by TKO. Rozenstruik has the power and technique to sift through his defenses as well. I think my issue here is a little bit of fight math. Overeem gets merked when he’s overwhelmed, and pressured + Rozenstruik isn’t a physically imposing pressure fighter. Rozenstruik would have to do something uncharacteristic, like blitz his opponent in order for me to feel comfortable picking him. Granted, his kickboxing has shown he’s capable of a broadsword attack; the kind of attack he could beat Overeem with. But MMA brings about its own set of obstacles, and right now, Overeem is the better mixed martial artist. It’s the rare instance where being well rounded pays off, not because being a complete fighter is better (it often isn’t), but because being well-rounded yields a level of comfort Rozenstruik hasn’t yet achieved. Alistair Overeem by Guillotine, round 2.

Phil: There isn’t much to say about this one: Overeem has lost many times to confident fighters that are willing to exchange with him, and Rozenstruik packs an uncommon amount of power and craft. That being said, the level of defensive wrestling and grappling that Rozenstruik showed in that Albini fight just can’t be overlooked. Gimme Overeem by a ground-based finish of some sort. Alistair Overeem by TKO, round 1.