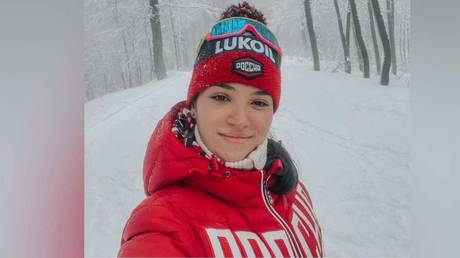 Russian cross-country skiing star Veronika Stepanova has shared her thoughts on the International Olympic Committee’s recent guidelines on transgender athletes – asking fans if they want to see her race rivals who were born men.

Among the most contentious points was the suggestion that transgender women should no longer need to reduce their levels of testosterone to compete in female categories.

Stepanova, 20, responded to the news on her Instagram account, sharing a screenshot of the IOC guidance along with her thoughts.

“From the endless and beautifully written 10 Points, it became clear that the flag between inclusiveness and fairness is finally shifting towards the first,” wrote Stepanova.

“Now any comrade with all the primary and secondary sex characteristics of a man can declare himself a person of the opposite sex and enter the competition as a woman.

“In theory, there’s a point under which a person may be denied the right to feel like a girl in a race – but the organizers will have to prove that he’s a swindler in pursuit of medals – he doesn’t need to prove or show anything at all, it’s enough to declare that he’s felt like a woman for a long time.

“I just have one question: will you watch races where I compete against a two-meter-tall former John, now [called] Conchita?

“I warn you: I won’t allow any hate in the comments, everyone who’s too active in this direction will be banned immediately, without warning.

“We’re only discussing this aspect: Are you personally interested in the show of ‘cisgender women versus transgender women’ or not?”

Stepanova has not been shy in sharing her views on topical debates, recently questioning fellow athletes for apparently mixing politics and sport by promoting Amnesty International.

Stepanova is a former Nordic world junior champion who is now part of the senior Russia team as they prepare for the Beijing Olympics in February.

Her coach Igor Sorin recently said he was not concerned by her use of Instagram.

“Her hobby doesn’t affect the training process at all. Veronika devotes herself completely to her work, the dedication is transcendental.

“I can give her some advice on what she does outside of sports, but so far I don’t see the need for this.”

Stepanova will miss the first stage of this year’s FIS World Cup in Ruka, Finland, but is set to compete at the stage in Lillehammer in Norway in December, according to Sorin.