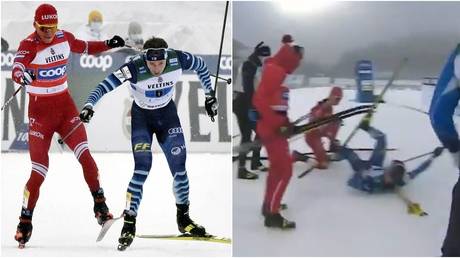 Russian skier Alexander Bolshunov and the president of the Russian Ski Association Elena Vyalbe have issued an official apology to a Finnish rival Joni Maki, following an angry clash during a relay race last weekend.

The row between the two competitors erupted on the track during the final lap of the men’s relay race in Lahti, Finland, as Bolshunov and Maki were viciously fighting for second place.

READ MORE: ‘He went crazy’: Russian team disqualified after skier clashes with Finnish rival before PLOWING INTO him at finish line (VIDEO)

The leader of the Russian squad, Bolshunov, intended to outrun his Finnish counterpart when the latter blocked his way to the finish line, infuriating the four-time time Olympic medalist, who vented his anger by hitting the Finn with his ski stick before plowing into him after crossing the finish line.

The Russian skier’s behavior resulted in his team’s disqualification and even became the subject of a criminal investigation.

Finnish police have confirmed that two criminal reports were filed against Bolshunov after the incident and that they have opened a preliminary investigation into the matter.

Finnish lawyer Oscar Lindberg, of Pontus Linberg & Co, has gone as far as to claim that the Russian athlete could face two years in jail if found guilty.

Two days after the controversial clash, Bolshunov and Vyalbe apologized for the skier’s actions, stressing that they “strongly value fair play in every aspect.”

“On behalf of the Russian Ski Association, Alexander Bolshunov and Elena Vyalbe express their apologies for the reaction of Alexander towards Joni Maki (FIN) during the men’s relay competition at the FIS Cross-Country World Cup in Lahti, Finland,” the statement said.

“Animosity is not a part of the spirit of the Russian Team and we strongly value fair play in every aspect. Alexander Bolshunov has, therefore, apologized to Joni Maki and an official letter of apology was sent to the Finnish Ski Association by the Russian Ski Association.

"We sincerely hope that the dedication and hard work of all athletes, their performances as well as the beauty of Cross-Country skiing will return to focus and amaze many fans all around the world.”

Bolshunov is set to compete at the FIS Nordic World Ski Championships which is scheduled to take place from February 23 to March 7 in Oberstdorf, Germany.