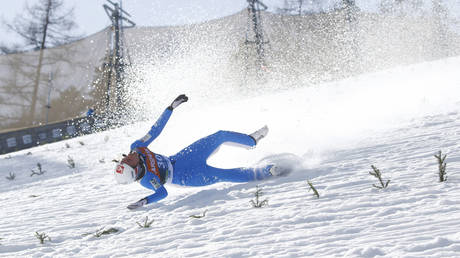 Norwegian ski jumping champion Daniel-Andre Tande has come out of a coma after surviving a horrific crash during training at a World Cup event in Slovenia’s Planica last week.

On Monday, the four-time world champion was reported to be in a stable condition after waking from an artificial coma and being taken off the respirator.

The Norwegian Ski Federation said the athlete is “awake and breathing on his own” after being gradually woken up following a terrible fall during one of his training attempts.

He lost control of his left ski midway through the jump – an error that sent him flying through the air at a speed of 100km/h before landing heavily on the snow.

I'm so worried about Daniel Andre Tande. I hope he'll get better soon and come out alive. When I saw it, shivers ran through me #skijumpingfamily pic.twitter.com/lh4zg7xKlp

The 27-year-old slid down the slope and was treated for almost 30 minutes on the hill by medical staff before being taken by helicopter to Ljubljana Medical Center.

He was diagnosed with a punctured lung and a broken collarbone, but didn’t sustain any life-threatening injuries as medical tests did not reveal any damage to the brain or neck.

Tande still remains in hospital in Ljubljana, but is expected to be released if his recovery process goes fast.