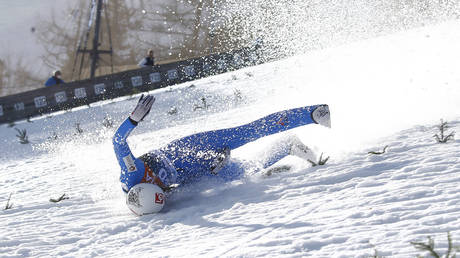 Nowegian ski jumper Daniel-Andre Tande has been put into a coma in hospital to protect his brain following a horrifying high-speed crash during a training session ahead of the World Cup in Planica, Slovenia.

The four-time world champion lost control of his left ski midway through the jump – an error that sent him flying through the air at a speed of 100km/h before landing heavily on the snow.

The 27-year-old slid down the slope and was treated for almost 30 minutes on the hill by medical stuff before being taken by helicopter to the Ljubljana Medical Centre.

Tande, who won Olympic team gold at the 2018 Winter Games, suffered a punctured lung and a broken collarbone. He is reportedly in a stable condition, with no life-threatening injuries.

I'm so worried about Daniel Andre Tande. I hope he'll get better soon and come out alive. When I saw it, shivers ran through me #skijumpingfamily pic.twitter.com/lh4zg7xKlp

"Daniel will be kept in a coma until at least tomorrow to reduce the stress on his brain," Norway's team manager, Clas Brede Braathen, said.

Norway's national coach Daniel Stöckl also confirmed that the athlete was stable after the horrendous fall.

"One can only hope for the best and that everything is fine with him," he said.