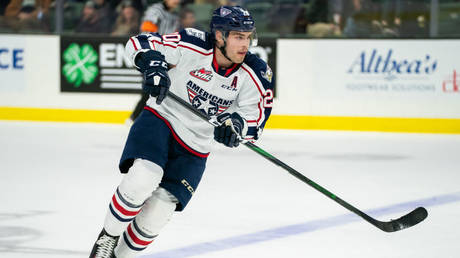 The disgraced star has been banned for 30 games

An American Hockey League (AHL) player has spoken of his shame and pledged to take education sessions after being banned for 30 matches over a racist incident during a match which the opponent it was aimed at has called saddening.

San Jose Barracuda forward Krystof Hrabik was immediately removed from team activities after being accused of aiming a 'monkey' insult at Boko Imama during his side's 4-3 win over Imama's Tucson Roadrunners on January 12.

Imama, who also suffered racism in an incident that earned one of his opponents a five-game ban in 2020, said he had been "dealing with situations like this my entire life".

.@TheAHL has announced a 30-game suspension for San Jose player Krystof Hrabik for using a racist gesture towards Tucson’s Boko Imama, who is Black.

Imama was also the subject of a racist gesture from AHL player Brandon Manning in a January 2020 game. pic.twitter.com/5CN4oHPv2A

Czech Hrabik apologized and insisted he had "absolutely no inappropriate intent."

“I am ashamed of today’s events and embarrassed by the actions that led to my suspension," said the 22-year-old.

"I want everyone to know that I’m very sorry for what has occurred and I take full responsibility for my actions.

"The gesture was made in the heat of battle and while I didn’t mean anything racist by what I did, I realize now through my own ignorance how my gesture could be interpreted.

"I alone am responsible for that; it was terrible, and I make no excuses. When I heard about Boko’s reaction to the gesture, I was horrified by what I had done.

"Boko is a player I respect and I am so sorry for putting him through this situation. I sent a personal apology to Boko and sincerely hope that he will forgive me."

Hrabik's gesture appeared to be mimicking an ape, I'm told.

Hrabik apologized to bosses and his teammates, said he would not be appealing against his ban and pledged to carry out "education and training on racism and inclusion."

"I know I will be judged by my future conduct," he accepted. "If given the opportunity, I will do everything in my power to atone for my actions and lead by example.”

The shocking situation is not new to Imama. “As a person of color playing youth hockey, through Junior and now twice as a professional, this keeps happening to me over and over again," he said.

Statement from Krystof Hrabik, who was suspended by #AHL today for 30 games for a racist gesture: pic.twitter.com/O3hA3CaOK4

“We have enough to work about as pro hockey players and it saddens me when anyone has to deal with these types of issues.

“Even though I honestly believe the sport has made positive strides, we still have a long way to go to educate the ignorant and to make hockey a safe place for everyone.

"My hope is that people learn from this and that, someday, hockey will truly be for everyone.”

In a statement, Barracuda said they had fully co-operated with the investigation, describing themselves as "appalled" alongside the Sharks and offering apologies to everyone involved, as well as their fans and "the entire hockey community."

"While we support the ability for individuals to atone and learn from disrespectful incidents in this context, [Hrabik's] actions are in direct opposition to the Barracuda and Sharks organizations’ values," they said.

The team will respond to the incident by launching a series of new training programs and workshops for staff and players.